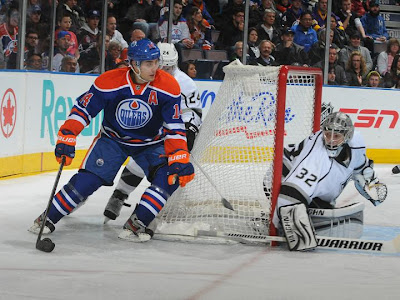 It was an odd night at Rexall Place for the Edmonton Oilers on Tuesday night. After peppering the Colorado Avalanche with fifty-six shots just three nights earlier, the Oilers reverted back to their old ways against the visiting Los Angeles Kings.

Couple that with an officiating crew that did not have the greatest of nights with their whistle and one particular sequence that played a major role in the Kings eventual game winner and the 3-1 loss for Ralph Krueger's crew was likely hard to stomach.

Sam Gagner was the lone Oiler to beat Jonathan Quick, while veteran Nikolai Khabibulin continued his stellar play since returning to the lineup, stopping thirty-five of thirty-seven shots fired his way. The Russian netminder fell to 1-2 on the season, despite posting a 1.91 GAA and .940 SV% in his three appearances.

There is no question, Edmonton has received close to elite netminding in nearly every game this season but Khabibulin and starter Devan Dubnyk have just six total wins to show for it. At some point, you have to help your goalie out and at the moment, that isn't happening nearly enough.

It looked as though the Oilers were headed for another a good night, as they swarmed Quick early on but were unable to sneak one by the Conn Smythe winner. Neither team managed to find the back of the net during the opening twenty minutes but the Kings took over in period two.

Former Oiler Colin Fraser would open the scoring at the 4:44 mark, banging home a juicy rebound for his first of the year, after out hustling both Nick Schultz and Ryan Niugent-Hopkins to the loose. puck. From that point on, it was all LA. They ran up a 12-1 advantage on the shot clock and if not for Khabibulin, the visitors would had this one put away.

A couple of ill timed penalties from Fraser and Jeff Carter, sandwiched by an Oilers too many men minor, gave Edmonton life and a delay of game penalty to Davis Drewiske, put Edmonton on their third partial power play...inside of four minutes.

Gagner would level things at one, as his quick shot deflected off Carter's stick and bounced past the helpless Kings netminder.. The goal was #89's fifth of the campaign and kept him in a tie for top spot on the Oilers scoring chart with Hall, who picked up his sixteenth point of the season on the power play marker.

The game was there for the taking in the third but the defending Stanley Cup Champs imposed their will from the drop off the puck. Luckily, Khabibulin was up to the task making a handful of huge stops to keep the Oilers alive.

To be honest, outside of a solid shift from Teemu Hartikainen and Magnus Paajarvi in the opening couple of minutes, Edmonton mounted next to no attack over the final frame. That being said, this one looked destined for overtime but a bad break at the Kings blueline and a perfectly timed deflection by Carter, left the Kings with two points in their pocket and the Oilers wondering what went wrong.

Unfortunately, Hall coughed up the puck at the Kings blueline, courtesy of linesman Thor Nelson's skate, and Los Angeles took full advantage of their good fortune, scoring with just fifty seconds left on the clock. Jarret Stoll would close out the scoring, sliding home his third of the year into an empty net, handing the Oilers their seventh loss in their last nine outings.

It was definitely a tough way to lose a game but the result was just. Edmonton went from making a concerted effort to fire as many pucks on net as possible, against the Dallas Stars and Avalanche, but reverted back to passing up shot after shot against the Kings.

Apparently a six goal night was not enough to convince this Oilers lineup to continue shooting the puck. Too bad because those were two points that were there for the taking, which could come back to haunt them come mid-April.
Posted by Oil Drop at 10:07:00 am