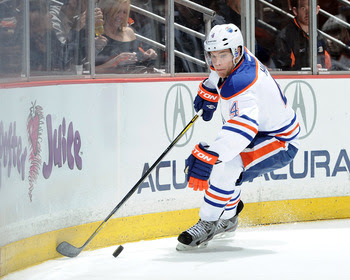 While Taylor Hall has been the talk of the National Hockey League since nailing Minnesota Wild pest Cal Clutterbuck with a controversial open ice hit during the Edmonton Oilers 3-1 loss on Thursday night, many felt the young Oiler forward was headed for a suspension of some sort.

NHL disciplinarian Brendan Shanahan did exactly that on Friday afternoon, handing Hall a two game ban for his knee-on-knee run in with the hard-hitting Clutterbuck. The two game banishment means Hall will not only miss the finale of the Oilers current five game home stand but also the first game of their season high nine game road swing, against the first place Chicago Blackhawks.

Not exactly the outcome Hall or head coach Ralph Krueger were hoping for but one that certainly can't have come as a surprise. Clutterbuck seems to have escaped major injury, as he is suffering from an "upper-thigh contusion", in other words...a charley horse. That being said, nearly everyone felt the former first overall selection was headed for some sort of suspension. It was more a matter of how many games, not if he would miss some time.

While the Oilers will be unable to replace Hall in their lineup, the time appears to have finally arrived for Ryan Jones to make his 2013 debut. Barring any sort of setback, it looks as though Jones will return to the lineup on Saturday afternoon against the Phoenix Coyotes.While Edmonton are in desperate need of the energy that the twenty-eight year-old typically brings to the table, the fact he hasn't played in an NHL game since last April, likely means he will need time to find his legs.

That being said, adding Jones into the mix certainly can't hurt. On a team that has scored all of fifteen goals at even strength, adding the former fourth round pick's scoring touch could not have come at a better time. After putting up 18 and 17 goal campaigns in his first two seasons in Orange and Blue, Jones has become Edmonton's poster boy for secondary scoring.

The former Nashville Predator has suited up for a 168 games since coming to the Oilers, scoring thirty-six times...twenty-eight of which that were scored while playing 5-on-5. While Jones was skating alongside Chris VandeVelde and Lennart Petrell, it will be just a matter of time before he finds himself inside Edmonton's top nine  forwards.
Posted by Oil Drop at 4:49:00 pm