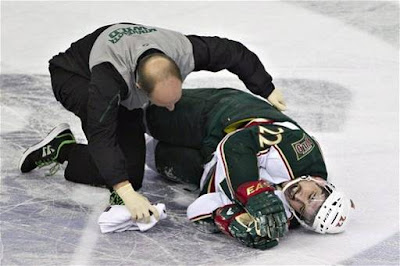 No one wants to see a player get hurt but Minnesota Wild forward Cal Clutterbuck plays the game on the edge and his number came up on Thursday night at Rexall Place, courtesy of the Edmonton Oilers Taylor Hall.

After making a career out of taking hard shots at opponents, some legal and some not so legal, the Wild forward got caught with his head down at centre and Hall decided to try and return the favour. The ensuing hit left the hard-hitting forward laid out at the centre ice circle and Hall with a five minute kneeing major and facing a possible suspension.

That being said, for a guy that has made a habit of using Oilers players as target practice throughout his five year NHL career, I see no problem with what the Oilers #4 did. Was it a dirty play? Apparently, as he somewhat missed his check and led with his knee and hip, in sending Clutterbuck sprawling to the ice surface.

The referee made the right call in assessing the former first overall pick a major penalty and game misconduct but I would argue that it was a dirty. He went for the big hit, just as Clutterbuck has on numerous occasions throughout his career, and was slightly off target. Unfortunately for him and head coach Mike Yeo, the shoe was on the other foot and not surprisingly...they did not like it too much.

One can understand Yeo not being overly thrilled with the play but for him to actually come out with the,  “How would it be if it was reversed? If it was Clutter hitting Taylor Hall that way? That’s what I wonder,” is almost laughable.

While Clutterbuck playing the game the way he does, in no way excuses Hall's hit, it certainly should keep his head coach in line. Considering the countless number of times he has taken late and or questionable runs at players across the league, Yeo should chose his words a little more carefully.

He went on to add, “To me I saw a player who didn’t even look at the puck, and he looked like he was trying to hurt a guy.” Really? You mean like Clutterbuck usually does? Nothing like the pot calling the old kettle black.

Let us be frank for a minute. With the Edmonton Oilers being a small skilled group that lacks any sort of size within in their forward ranks, their players typically skate around NHL rinks with a bulls-eye on their collective backs. The vast majority of teams try to take advantage of this and last night's hit was a response to exactly that.

Hall has not only been run at on numerous occasions during his two plus seasons in the league but has also watched the likes of Jordan Eberle, Sam Gagner, Ales Hemsky and Ryan Nugent-Hopkins take their fair share of lumps on an almost nightly basis.  At some point, you should expect some sort of response and since the Oilers do not really have someone that fills that role, Hall took matters into his own hands.

Should Brendan Shanahan and the NHL office decide to suspend Taylor Hall, so be it. It would be a tough break for a club that is struggling to find their way but one they or more than capable of overcoming in the short term. I honestly can't remember the last time one of the Oilers top players was suspended and frankly, it was long overdue.

This team badly needs to add an edge to their game and watching Hall hammer Los Angeles Kings defenceman Drew Doughty with a big hit on Tuesday night and than take a healthy run at Clutterbuck two night's later, was a step in the right direction. Let's hope some of his teammates follow his lead.
Posted by Oil Drop at 6:15:00 am