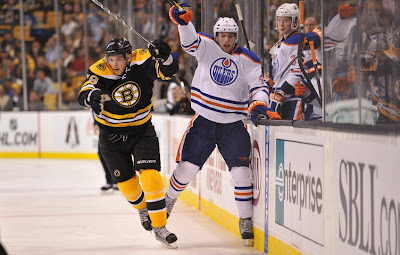 The goals have yet to come for Taylor Hall this season but that has now been the case in each of three NHL campaigns. The difference between this year and his rookie and sophomore campaigns, is the Edmonton Oilers leading scorer is, more often than not, the best player on the ice...for either side.

With talk starting to make the rounds on possible selections for Team Canada's entry in the 2014 Winter Olympics, it is rather perplexing that you almost never hear Hall's name in the conversation and yet almost every list includes Boston Bruins forward Tyler Seguin.

While Seguin had himself a tremendous sophomore season in Beantown, after being used more or less in a bottom six role for much of his rookie year, he has rarely shown the ability dominate games on a game by game basis. Don't get me wrong, he is a fantastic player and at the end of the day, Seguin may end up being the better player or possibly have the better career but two plus seasons into the so called "Taylor vs Tyler" debate, it hasn't even been close.

The second overall pick of the 2010 NHL Entry Draft has been allowed to work himself into the National Hockey League game at his own pace, thanks to playing for one of the best teams in the league. Hall has been at the opposite end of the spectrum, having loads of ice time and responsibility heaped upon his shoulders from the outset. Both have had their shares of high's and low's but the twenty-one year old Oilers forward has started to elevate his game to another level.

With all due respect to the Bruins future cornerstone, he has been nothing more than  piece of the puzzle in Boston. Whereas the top pick of that same 2010 Draft, has already become a major piece in Edmonton's rebuild and is without the question, the straw that stirs the drink in the Alberta capital.

As good as the likes of Jordan Eberle, Ryan Nugent-Hopkins, Justin Schultz and Nail Yakupov may be, there is no question who the horse is on this team. Despite having yet to find his mark from a goal scoring stand point, Hall still leads the club with fifteen points in fourteen games and has been a force in nearly every game this season.

In all honesty, it is kind of scary to think how high those totals could go, once he actually starts burying his chances. During his first two seasons, the youngster struggled to find the back of the net in the early going but once he did, he went on an absolute tear.

In 2011-2012, the former Windsor Spitfires standout started off the year scoring just three times in his first seventeen games. He than went on to score twenty-four more over his final forty-four outings. It was much of the same during his rookie campaign, scoring three in his first eighteen games and followed that up by potting nineteen over his final forty-seven. See a trend?

To date, Taylor has scored 52 times and registered 110 points over two plus seasons and 140 games played. In contrast, Seguin has played has seen action in 168 games, scoring 43 goals and picking up 97 points. As mentioned earlier, the former Plymouth Whalers centre had far less opportunity to contribute during his rookie season but has now played 28 more games than his Oilers counterpart and with with some of the Bruins very best players.

There are those out there who will try to tell you Hall has struggled this season but nothing could be further from the truth. His 3G-12A-15Pt stat line looks is far more impressive than Segun's 3G-5A-8Pts start to the year and yet Seguin is the one being mentioned as a "lock" for Team Canada's squad at the Sochi Games.

Really? So what gives?

There is far more that goes into a player's overall game than his point total, which is exactly why Hall should be the one having the accolades coming his way, as a future Olympian.

The kid can flat out take over a game when he is on, which is quickly turning into a nightly occurrence, and the just mere thought of his speed on the big European ice must send chills up and down the Team Canada brass. Quite frankly, he could be such a massive weapon for Steve Yzerman and company to add to their arsenal, that it may be almost impossible to leave him off their roster.

Like Seguin, the Oilers Jordan Eberle has also been on many lists but Hall remains mysteriously absent. Though we all know if Taylor Hall played in a major American market or was a member of either the Toronto Maple Leafs, Montreal Canadiens or Vancouver Canucks, his inclusion would be almost automatic.

Again, this isn't a slight on Tyler Seguin but as things currently stand, if one is seriously looking at which of these two youngsters is most likely to have a bigger potential impact for Team Canada at the 2014 Olympics, it's not even a discussion.

Both are wonderful players and both will likely be members of many a Team Canada team over the next number of years but if you had to take one in the here and now, the kid that calls Rexall Place home and wears the #4 on his back, is the obvious choice. Though there is no real good reason why both Taylor Hall and Tyler Seguin could not find themselves both in Sochi come 2014.
Posted by Oil Drop at 9:28:00 am