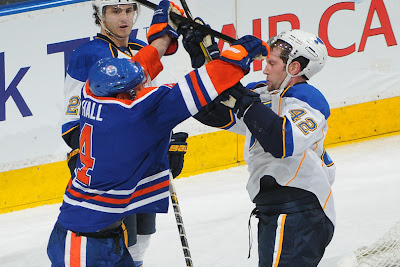 Well that was painful. After clawing their way back into the Western Conference playoff race over the last couple of weeks, the Edmonton Oilers were handed a rude awaking on Saturday night. In what was as thorough a beat down as this club has received this season, the St. Louis Blues waltzed out of Rexall Place with two points, courtesy of a 3-0 victory.

For the second consecutive outing, Edmonton were without their number one centre in Ryan Nugent-Hopkins, who was still unavailable due to illness. In a game in which the Oilers somehow entered the third period down just a single goal, they could have surely used the Nuge, as they mustered up next to nothing upfront.

It would be hard to imagine a goalie having an easier night than Jaroslav Halak, earning his third shutout of the year. Give the Blues full marks for imposing their well from the outset, as this one quickly turned into nothing more than a battle of "Men vs Boys"...and those boys still have a long way to go before they are ready to compete with the best the NHL has to offer.

In what was a somewhat surprising move, Krueger decided to go turn to veteran Nikolai Khabibulin, instead of starter Devan Dubnyk, in what was a must win situation. Despite having not seen a single second of action since tweaking his groin against the Chicago Blackhawks on  February 25th, Khabibulin looked sharp in his return and was frankly the only reason this one wasn't a complete blow out.

However, his lack of playing time reared its ugly head in the early stages, as Chris Stewart beat the Russian puckstopper with a shot from well out. While Stewart's quick release allowed him to use Sam Gagner as a screen on the play, it was a shot that Khabibulin had to have and one that set the tone for the kind of night it was going to be.

Edmonton were handed an opportunity to square things up at the 9:42 mark, as David Perron took his his first of two consecutive minor penalties. Unfortunately for the Oilers, their recent struggles on the power play continued, in creating absolutely zero on the man advantage. At the end of one, the scoreboard may have only read 1-0, with the shot clock only marginally in their favour at 6-4 but St. Louis was in complete control.

The Blues could smell blood and turned it up another notch in period two and outside of Khabibulin, no one else would raise their level of play. The Oilers netminder made a number of key saves to keep it a one goal game, the best of the bunch being a brilliant pad stop off Stewart late in the frame. Despite being badly outplayed over the opening forty minutes, they still had the opportunity to regroup and try to take something away from what had been a less than stellar performance.

That notion did not last long, as Khabibulin was forced to stone Stewart all of thirty seconds into the third and the point was further driven home, when Alex Steen made it a two goal bulge before the period was three minutes old. Taylor Hall decided to try and beat Roman Polak at the red line, instead of simply dumping the puck into the St. Louis zone, but the veteran blueliner stood his ground and turned it into a two-on-one going the other way.

Making up a two goal deficit against the Blues is a chore at the best of times but on this night, it may as well have been a ten goal difference. T.J. Oshie would add another for good measure, finishing off a lovely three way passing play for his sixth of the season, sending Edmonton to another loss on what was a critical four game homestand.

Edmonton now finds themselves in thirteenth place in the Western Conference but more importantly, four pints back of the Dallas Stars in the eighth and final playoff spot. With their schedule being what it is, ten of their final eighteen on home ice(which includes three against the Calgary Flames), they still have hope of climbing back into a playoff spot but it is starting to seem more and more unlikely.

Especially when one realizes their home record of 5-5-4 is by far and away the worst in the West and trails only the Florida Panthers(4-8-5) for the worst mark in the entire National Hockey League.
Posted by Oil Drop at 10:50:00 am