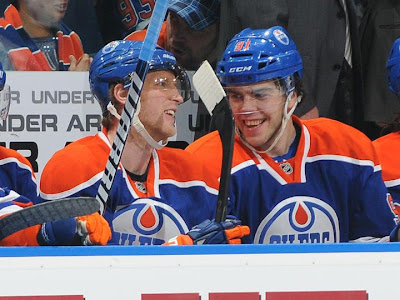 It was one of those night's that looked to be headed towards disaster for the Edmonton Oilers. After crawling back from an early 2-0 deficit, it took these Oilers all of twenty-seven seconds of period three, to allow the Columbus Blue Jackets to jump in front 4-3. At which point point Ralph Krueger reached his breaking point.

Out came Nikolai Khabibulin, who after allowing an awful opening goal, had himself nothing more than an average night but was far from terrible. In came Devan Dubnyk. Message sent and received. After watching their veteran netminder steal his club two points on Tuesday night in St.Louis, his teammates owed him big time and responded in a big, big way.

In what was a near carbon copy of the Oilers comeback victory over the Colorado Avalanche on February 16th, albeit later in the game, in which Krueger decided to pull Dubnyk after a tough first period against the Avs. After watching their starter carry them for much of the first four weeks of the season, his teammates owed him and they delivered.

It was déjà vu all over again at Rexall Place on Thursday night.

An absolutely monster stop from Dubnyk, coupled with yet another Ales Hemsky highlight reel goal, gave the Oilers their first lead of the night, with just over three minutes to play. Not much different from a  trio of stops from Khabibulin against the Avs, which ultimately led to Magnus Paajarvi's third period winner.

On that night, it was the vet who picked up the starter and Dubnyk returned the favour in spades last night, helping the Oilers pull off another come from being victory, ironically enough by that same 6-4 scoreline, over the Columbus Blue Jackets.

It was an odd night for the Orange and Blue, who found themselves down a pair of goals before realizing the hardworking Blue Jackets had come to play. Paajarvi would notch his seventh on the campaign, before the first intermission, to cut the lead in half and give Edmonton some hope over the final forty.

Jordan Eberle would get them level thirty nine seconds into period number two, scoring what was arguably as nice a goal any Oiler player has scored this season. The silky smooth former thirty-four goal man, weaved his way through the Columbus defence, before sliding home his tenth of the year behind Sergei Bobrovsky.

Give Columbus credit, after having what should have been the go-ahead goal incorrectly waived off, Artem Anisimov responded with his ninth of the year, mere moments later. However that lead would be short-lived, as Shawn Horcoff finished off a gorgeous three-way passing play with Ryan Jones and Nail Yakupov. It was a huge response from the Oilers and seemingly gave them all the momentum heading into period three.

After Cam Atkinson chased Khabibulin from the net, mere seconds into the period, Edmonton were handed a bit of gift, less than three minutes later. A harmless looking point shot off the stick of Corey Potter, somehow found its way through a partially screened Bobrovsky, that the Jackets starter would love to have back. Just like that it was all tied up and set the stage for the late game heroics from the Dubnyk/Hemsky duo.

Since entering the game at the twenty-seven second mark of the third, the Oilers tender had next to nothing to do, until being called upon to make what was arguably a season saving stop off Atkinson and robbing the Jackets forward of his second career NHL hat-trick.

Hemsky took care of the rest.


Sam Gagner would close things out, flipping home his thirteenth of the season from deep in the Oilers zone, to secure the two points in regulation time. The win pulled Edmonton into a tie for tenth place with Columbus, Dallas and Phoenix, three points back of the eighth place St.Louis Blues. While, the Nashville Predators currently sit ninth in the Western Conference with thirty four points, one point ahead of the Blue Jackets, Coyotes, Oilers and Stars.
Posted by Oil Drop at 11:43:00 am