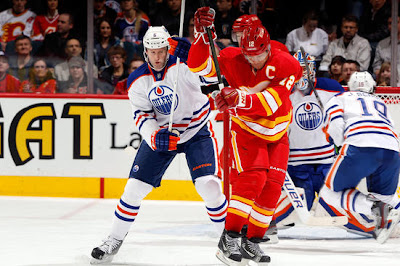 When head coach Ralph Krueger decided to not dress defenceman Ryan Whitney for seven of eight games during the last half of February, the veteran blueliner looked to be all but finished as a member of the Edmonton Oilers. Four weeks later, that no longer seems to be the case, leaving General Manger Steve Tambellini in a very tough position, heading into the NHL Trade Deadline.

With the Oilers set to play just two more times prior to the deadline, hosting the Vancouver Canucks and Calgary Flames over the next three days, a couple of wins may cloud Tambellini's judgement even further, when it comes to what to do with the native of Boston, Massachusetts.

Does he try and net the organization some sort of return from the asset or does he stand pat and allow Whitney to help the club continue their run towards earning their first playoff spot since 2006?

Some may find this one to be a tough call but in all honesty, it is quite simply. Should Edmonton still be in contention come the morning of April 3rd, barring some sort of massive over payment from a desperate General Manager, there is no way in hell the Oilers GM should move the thirty year old, pending free agent.

This team has looked dead in the water on numerous occasions during this abbreviated NHL season and yet have continually managed to fight their way back into the playoff mix.

Have they been at their best on many nights this year? You would have to answer that question with an unequivocal no but when you take a look at the Western Conference standings, there they sit. Just three points out of the playoffs.

They play nine of their remaining fifteen games at Rexall Place and while their schedule is far from soft, few have as many homes dates left on their dance card, as Ralph Krueger's crew. The potential of sneaking into the post-season truly does exist and with the team being as healthy as they have been at any point this season, Edmonton should be able to take a legitimate run at earning that final spot.

With that being said, what type of message would Tambellini be sending, were he to move Whitney by Wednesday's deadline? When it comes to the Oilers, it may not be about the here and now in the eyes of many but at the end of the day, the players have to believe management has faith in them to get the job done. Not sure how you accomplish that, by moving a guy that is playing his best hockey in well over two calender years.

To his credit, since sitting out those seven games, Whitney has appeared in thirteen of the Oilers last fourteen games, scoring three times and chipping in with four assists. That leaves him second in scoring among Edmonton blueliners with ten points, trailing only rookie Justin Schultz.

The Oilers D core is not exactly blessed with an over abundance of puck movers and removing #6 from the equation, without a viable replacement, would prove to be disastrous.

Outside of the aforementioned Schultz and Jeff Petry, Whitney is the only other defender capable of moving the puck up ice. Some would argue that Corey Potter can also fill that role but with all due respect to Potter, that is nothing more than a pipe dream.

Whitney can be a bit of an adventure in his own end of the ice but there is no questioning his offensive abilities. Remove that from the mix and you tell me what the players in that room will think?

If nothing else, the former fifth overall pick's rejuvenated play has got to have Tambellini considering whether or not re-signing to an extension is something the organization should seriously explore.

His injury history would lead one to believe it would not be the wisest move but when you take a close look at the unrestricted free agency pool this upcoming summer, something rather odd standouts.

Visnovsky's current teammate, Mark Streit, joins Whitney and Ladislav Smid as the top three guys that could be available this off season. Now there could be a few more names thrown into the fray because of potential buyout scenarios across the league but those names will likely include the Mike Komisarek's of the world, rather than any sort of quality NHL defenceman.

Both Smid and Whitney have made it known they would love to sign extensions but that will come down to three things. There has to be genuine interest on the organization's part to get a deal done, which does not appear to be the case when it comes to Whitney. The other two, are fairly obvious...dollar value and term.

If the Oilers were to decide to go in a different direction, Tambellini and company would be forced to look at improving the roster via trade. Not necessarily a bad idea but one that would ultimately lead to at least one of their young players upfront, being moved in the deal. Should that opportunity arise and make sense for the long term betterment of the club, perhaps they do it.

At some point, this organization is going to have to make such a call but is this summer that time?.

One thing you can almost certainly count on, Should either Whitney or Smid hit the open market, neither will be re-signing with the Oilers for the 2013-14 season. The ball is in your court Mr. Tambellini, time to make those tough decisions, that come with being an NHL general manager.
Posted by Oil Drop at 8:28:00 am