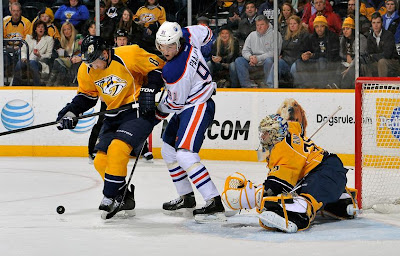 In what was very much a do or die situation for the Edmonton Oilers in Nashville on Monday night, they managed to score the opening goal for the tenth time in their last fourteen outings but showed next over the opening forty minutes of action. Not surprisingly, their lack urgency  cost them yet another two points, in falling 3-2 to the Predators in a key Western Conference battle.

Pekka Rinne was solid in the Nashville net, stopping twenty-four of the twenty-six shots fired his way, while Devan Dubnyk was unable to raise his level of play in a must-win situation, allowing three consecutive goals over a twenty minute span. Taylor Hall and Shawn Horcoff scored in the losing effort, that has nearly pushed the Oilers out of playoff of contention.

Ralph Krueger's side came out of the gate with a solid start, that saw them jump out to an early lead, courtesy of their power play. Hall would notch his seventh of the season, deflecting home Corey Potter's point shot, past a screened Rinne . The goal came all of eleven seconds into Patric Hornqvist's interference minor, as Ryan Nugent-Hopkins instantly made his presence felt, handing Potter a perfect feed to hammer on goal.

Despite their quick start, the Oilers were unable to sustain it past the midway point of the opening frame, as the Preds slowly started to take things over. Dubnyk tried to stem the tide, stoning Mike Fisher with a huge stop in tight, after Edmonton were victimized on just an awful line change, but the big man bailed them out with a huge save.

Unfortunately, it did little to light a fire under his mates, as Sergei Kostitsyn tapped home his third of the campaign, just over thirty seconds later. Matin Erat did all the heavy lifting, outworking two Oilers along the sideboard, before finding Fisher down low. The former Ottawa Senator wasted no time in finding the wide open Kostitsyn, to level things one a piece.

They would grab the lead early in period two, as the Oilers were caught running around in their own end, allowing Kostitsyn to find a pinching Kevin Klein, after freezing Dubnyk and pulling the netminder out of position. Just like that, any momentum gained from Hall's earlier power play marker was erased.

Six minutes later, they would extend their lead to 3-1, as Mark Fistric and Potter combined to turn a simple two-on-two rush, into what was essentially a breakaway for Chris Mueller. The former Dallas Stars blueliner was made to look foolish by Brandon Yip, as the Preds forward walked around the Oilers rearguard, who was inexcusably going for the big-hit, instead of simply fronting his man.

Potter made an already ugly play that much worse, as he completely lost his mark and handed Mueller the opportunity to break in all alone. Dubnyk was unable to stop the bleeding and come up with that momentum changing save, as Mueller snapped home his second of the season.

To Edmonton's credit, they pushed hard in the third period and essentially took it to Nashville over the final twenty minutes but Rinne stood tall. While Horcoff did manage to cut the lead in half, as Ales Hemsky's cross crease pass bounced in off the captain's skate and through the Predators netminder, Edmonton were unable to find a way to sneak the equalizer past the towering Finnish tender. This despite being handed back-to-back power play opportunities, after trimming the lead down to one.

The loss dropped Edmonton five points behind the playoff cut-line in the Western Conference, as the San Jose Sharks beat the Anaheim Ducks to push their total to thirty-four points. The Oilers will closeout their brief two game road trip on Tuesday night, as they pay a visit to Ken Hitchcock and the St. Louis Blues. Those same Blues who thoroughly dominated Ralph Krueger's crew in their 3-0 victory on Saturday night at Rexall Place.