Time for Dubnyk to elevate his game and steal a couple 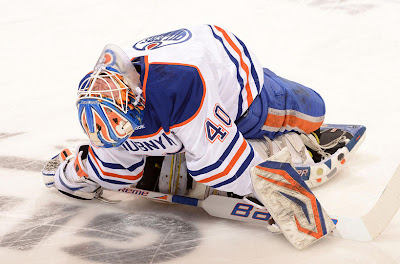 The Edmonton Oilers have gone 3-1-2 over their last six games and watched themselves yo-yo up and down the Western Conference standings. They kickoff their brief two game road trip tonight in Nashville against the Predators and close it out on Tuesday evening in St. Louis.

The Oilers don't need a split, nor three out of four points. They have to absolutely have all four points, be it in regulation or overtime. There are no more excuses. The pressure is on and the time to produce  is now at hand.

Without a question, they need to be better as a collective unit but what this team needs more than anything else, is for their netminder to put this group on their back and ensure they come home with those four points in their pocket. Any quality starting goaltender will carry his team for stretches during a season and for Devan Dubnyk, that time is right now.

After starting just two times over the past nine days, the Oilers #1 guy should be ready to go. While the former first round pick has been steady for much of the season, he has had his fair share of ups and downs. Dubnyk has put together a very nice .918 SV% in his twenty appearances but has also allowed far too many questionable goals, usually at the worst possible moment. None of that matters anymore. All that matters are these two games.

The difference between being an average run of the mill starting National Hockey League goaltender and one that is looked upon as being a guy that can get the job done when it matters most, usually isn't much. Typically, it comes down to whether or not he is capable of shutting the door, when it matters most.

It has nothing to do with how many saves a guy makes on a nightly basis and everything to do with making that big stop when necessary. That is what separates the good goaltenders from the great ones and to this point in his career, the soon-to-be  twenty-seven year old has yet to show he can be that guy.

In all honesty, can any of you remember the last time an Oilers netminder stole this team a game? Dubnyk's performance in Columbus back on February 10th, would likely be the last time it has happened. Edmonton has played eighteen games since, which is 38% of their schedule. Simply not good enough.

Yes this team needs to be better with and without the puck and they also need their best players to be their best players on a nightly basis. That being said, like every other team battling for a playoff spot, at some point, you need your goaltender to be better than the guy at the other end of rink and steal them a game from time to time. The fact that it has rarely happened during the Oilers first thirty games is unfortunate for the club but means very little for the remaining eighteen games.

As of right now, all that matters are these next two games. They have to have these points and they need their goaltender to be the one driving this bus. It may not be fair but it is the nature of the position. The spotlight is squarely on Devan Dubnyk and the time has come for the big guy to take his game to another level and steal his team a game from time to time, starting tonight in Nashville.
Posted by Oil Drop at 9:24:00 am