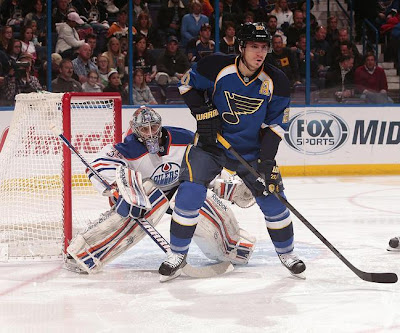 On a night in which the Edmonton Oilers reunited the trio of Jordan Eberle, Taylor Hall and Ryan Nugent-Hopkins, it was a brilliant performance from Nikolai Khabibulin that proved to be the difference, earning his team a huge 3-0 victory. However, the top line did play a massive role in the win, combining for all three goals and eight points on the night.

Make no mistake, the Blues were the better side for much of the night but unlike previous outings against Ken Hitchcock's crew, the Oilers would compete from start to finish. After being physically dominated for much of the first period, Edmonton decided to finally show some fight back over the final forty, taking runs at the likes of David Backes and Chris Stewart.

After a rather uneventful opening ten minutes of play, the visitors would hit the score sheet first, as Eberle buried his first of two on the night. The goal clearly sparked the kids but also woke the Blues up, as they started to come in waves. Khabibulin was more than up to the challenge, making huge stops off Backes, Alex Steen and Vladimir Tarasenko, in the back half of the opening frame.

The Oilers would strike early in period two, as Eberle would beat Jake Allen one more time, with a bullet under the crossbar for his ninth of the year, to make it a two goal bulge.From the Blues standpoint, it was a double whammy, as #14's goal came seconds after Khabibulin stoned David Perron on a clear-cut breakaway. It was an absolutely monster stop from the veteran netminder and one that turned the tide in favour of the Orange and Blue.

Hall would bring Allen's night to an early end at the 5:17 mark, banging home a loose puck, after the St, Louis starter denied Eberle's attempt at his hat-trick goal. Just like that, a one goal advantage has turned into a three goal deficit and Hitchcock was not amused. Out came Allen, in went Jaroslav Halak and suddenly the ice was tilted towards the Oilers zone.

St. Louis proceeded to bombard the veteran Russian netminder for the remainder of the frame, out shooting the Oil 21-5, but were unable to break through the 'Bulin Wall. While the Blues had a number of quality chances to break the goose egg, Khabibulin had the answer each and everytime. He easily turned a side another breakaway attempt, this time off the stick of David Backes, and made a pair of brilliant stops in the dying seconds of the frame, off Andy McDonald and T.J. Oshie.

The scoreboard may have read 3-0 for the visitors after two periods of play but this one was an all out robbery by the man wearing #35. This club has been dying for a goaltender to put them on his back and steal them two points for sometime know and the former Stanley Cup winner did exactly that.

To their credit, Edmonton closed this one out with a solid third period performance, after blowing a pair of two-goal, third period leads, in the last two weeks. It was far from a textbook performance, being heavily  out shot 43-19, but they made the most of their opportunities.

The win allowed Edmonton to leap frog the Phoenix Coyotes in the standings and pull them within three points of the San Jose Sharks for the eighth and final playoff spot in the Western Conference. The Oilers now head home for a brief three game homestand, prior to the NHL Trade Deadline, that will ultimately decide their season.

Should they manage to pull off wins against the Columbus Blue Jackets, Vancouver Canucks and Calgary Flames over the next six days, the Edmonton Oilers just might find themselves playing those so-called "meaningful games"down the stretch.
Posted by Oil Drop at 6:32:00 am