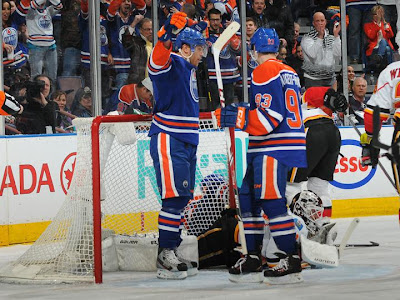 It was a game the Edmonton Oilers simply had to have and while they did not bring their "A" game to the rink but rode the wave of another strong first period, in disposing of the reeling Calgary Flames by a score of 4-1.

Defenceman Justin Schultz led the onslaught with three points in the opening frame and Taylor Hall continued to terrorize goaltenders across the NHL, chipping in with another two point effort. Devan Dubnyk was solid, making thirty-three stops, in earning his eleventh win of the season but the same could not be said for the man at the other end of the ice.

Amidst trade speculation of possibly being moved prior to Wednesday afternoon's NHL Trade Deadline, Miikka Kiprusoff's season from hell continued to unravel. The veteran tender lasted less than seventeen minutes, allowing three goals on six shots, before being yanked in favour of Joey MacDonald.

General Manager Jay Feaster decided to put his slumping club behind the eight-ball, before this one even started, moving star defenceman Jay Bouwmeester to the St. Louis Blues, some thirty minutes prior to the drop of the puck. With the club still woozy from the losing Jarome Iginla late last week, pulling their best defenceman from the lineup was clearly more than Bob Hartley's crew could handle.

To their credit, Calgary came out flying but were unable to sneak one past Dubnyk in the opening couple of minutes. That would prove to be rather costly, as the Oilers would come to life after a sloppy start, thanks to the red-hot Hall.

In what was a near carbon-copy of what the line of Jordan Eberle, Hall and Ryan Nugent-Hopkins accomplished in their beat down of the Vancouver Canucks on Saturday night, the trio pinned the Flames deep in their zone with what appeared to be an endless cycle, before Hall found a pinching Schultz for a wide open look in the slot, to make it 1-0.

For reasons known only to himself, defenceman Mark Giordano simply stepped back and allowed the Oilers rookie defenceman to skate in and pick his spot, on a helpless Kiprusoff. The goal was the youngster's sixth of the season and ended his personal fifteen game goal-less drought. That seemed to give Edmonton life, as they started to come in waves.

Schultz would return the favour, just over six minutes later, finding an unmarked Hall, who wasted little time in beating the Flames starter with a nifty little backhand, making it a two goal cushion. The goal was the former first overall selection's twelfth on the campaign, stretching his current point streak to five straight and giving him seventeen points in his last eleven games.

Hall's two point effort leaves him with thirty-six points on the season, moving him into a tie for tenth in league scoring with Chicago Blackhawks captain Jonathan Toews and Detroit's Pavel Datsyuk.

Ryan Jones would close out the scoring in what was a wild opening twenty minutes and bring the Flames veteran netminder's night to a premature end. Jones took a lead pass from Nail Yakupov and flipped a harmless looking backhand, from a terrible angle, that somehow found its way through Kiprusoff and into the back of the Calgary goal.

That made it three goals in less than thirteen minutes and forced Hartley to send MacDonald in, to try and stop the bleeding.

Yakupov would make it a four goal bulge, midway through period three, squeaking his first in seventeen games through MacDonald. It was the first multi point game of the year for the rookie winger and leaves him a single point back of Schultz for fifth in rookie scoring.

With the win, Edmonton moved into a tie for ninth place in Western Conference with the Columbus Blue Jackets, one point back of the eighth place Blues. St. Louis had little trouble in beating the Northwest Division leading Minnesota Wild by a score of 4-1 on Monday evening, leaping over the Jackets and back into eighth spot.

The Oilers have won four straight games and have gone 7-2-2 in their last eleven games. Not surprisingly, their recent run coincides with the exact moment captain Shawn Horcoff returned to the lineup from a broken knuckle.
Posted by Oil Drop at 9:10:00 am