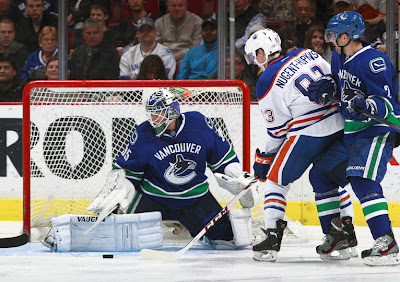 Apparently last Saturday's butt kicking at the hands of the Edmonton Oilers left a bad taste in the mouths of the Vancouver Canucks. Alain Vigneault's Northwest Division leading side were all business on Thursday evening, returning the favour by thumping the Oilers by that same 4-0 score at Rogers Arena.


Two point efforts from Henrik Sedin and Jason Garrison proved to be more than enough, on a night in which Edmonton had little left in the tank, after  pounding the Calgary Flames a mere twenty-four hours earlier. To Vancouver's credit, they jumped on the visitors from the drop of the puck and never let up, in sending a message to the young Oilers.

Cory Schneider was solid, making twenty-three stops and earning his fourth shutout on the season, but in all honesty, had very little to do against an Edmonton side  that had been firing on all cylinders. After scoring twenty-four times in their last four outings, Ralph Kruger's crew were reeling for much of the sixty minutes.

Nikolai Khabibulin received the surprise start in between the pipes for the Oilers and kept his time alive, despite being peppered with numerous high-end scoring chances over the opening forty minutes. To be perfectly frank, it was a night in which the Canucks showed why most experts still consider them to be legitimate Cup contender come playoff time, despite being very inconsistent for the majority of the abbreviated NHL campaign

A continual first period parade to the penalty box would prove to be rather costly for the Oilers but was made that much worse, courtesy of a first period brain cramp from Ryan Smyth. With Edmonton already on the penalty kill, Smyth inexcusably turned the puck over just inside the Canucks blueline, that instantly saw the puck head back into the Oilers zone and catching his team in the midst of a line change.

The too many men on the ice penalty handed the struggling Vancouver power play an extended 5-on-3 and Kevin Bieksa took all of sixteen seconds to make them pay for #94's blunder. Khabibulin did all he could to limit the damage to one, making a number of huge stops in the period's dying moments. Unfortunately, the stellar play of their veteran goaltender did little to ignite a fire under what was clearly a physically and emotionally drained hockey club.

Henrik Sedin would make it a two goal bulge, late in period two, after the Oilers were caught running around in their own end and somehow leaving the talented Swede unmarked, for an easy tap in. Chris Higgins and Zack Kassian would add three period markers to make it a four goal difference but this one was all but over, the second Sedin extended it to a 2-0 lead.

The Oilers top line of Jordan Eberle, Taylor Hall and Ryan Nugent-Hopkins were kept in check for much of the night, after having their way with the Canucks during last weekend's Hockey Night in Canada debacle. While the trio generated the majority of Edmonton.s few quality chances, Vancouver played them as well as any team has this season.

The regulation loss would cost the Oilers their spot as the eight seed in the Western Conference, as the St. Louis Blues moved back into sole possession of eighth place, with a 4-3 shootout victory over the Chicago Blackhawks. With thirty-nine points on the season, Edmonton now sit in a tie for ninth place with the Columbus Blue Jackets, a single point back of Ken Hitchcock's crew.

After having their season-high five game winning streak come to a rather abrupt end, the Orange and Blue will look to complete their current four game road swing on a positive note, with a Saturday afternoon affair against the Los Angeles Kings and follow that up with a Monday evening tilt against the Pacific Division leading Anaheim Ducks.
Posted by Oil Drop at 7:58:00 am