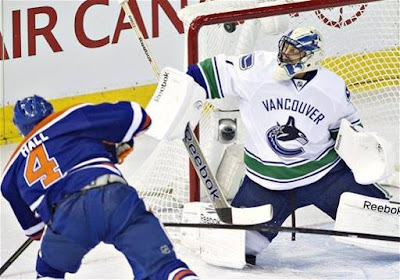 On a night in which the Edmonton Oilers needed their best players to be their best players, the best of the bunch delivered one of his finest performances of the season. Taylor Hall took his game to another level, registering his third career hat-trick, in leading the Oilers to a dominating 4-0 victory over the Vancouver Canucks on Hockey Night in Canada.

Hall's three goal outburst came in the opening eight minutes of action, breaking Wayne Gretzky's club record for the fastest three goal effort in team history, and put this one to bed early.

He opened the scoring all of sixteen seconds in, beating Cory Schneider high to the glove side and sending Rexall Place and the Oilers bench into an all out frenzy.

Ladislav Smid would bring Schneider's night to an abrupt end, beating the stunned netminder for his first of the season and ending the his evening after all of 2:05. Two goals on two shots and in came Roberto Luongo. Unfortunately for Vancouver, the move did little to slow down the man that wears #4 in Orange and Blue.

Ryan Nugent-Hopkins would find a streaking Hall for a wide open look on the new Canucks tender and he wasted little time in snapping a shot past Luongo, high to the blocker side, to make it three goals on three shots and give Edmonton a commanding three goal lead.

The onslaught would continue, as the former first overall selection would complete his first period trick, stuffing home his eleventh of the season and shattering Gretzky's record of 12:38. The Canucks looked absolutely shell-shocked and Ralph Krueger's crew could smell blood.

The score would not change the rest of the way but that had more to do with Edmonton hitting a couple of goal posts and Luongo making a handful of ridiculous stops, including robbing Hall of his fourth on the night, with what was arguably the save of the year in NHL this season. The 4-0 scoreline was frankly flattering for Alain Vigneault's group, that were riding a six game winning streak, before being torched by the suddenly surging Oilers.

Devan Dubnyk made twenty-three stops in earning his second shutout of the year but outside of brilliant pad stop off of Chris Higgins late in the first period, the big man had one of his easier outings of the season. The win moves Dubnyk's record to 10-10-4 on the year with a 2.58 GAA and a .920 SV%.

The trio of Jordan Eberle, Hall and Nugent-Hopkins continued their solid play since being reunited earlier in the week against the St. Louis Blues, registering another six points between them. Bringing their total to eighteen points in three games, since being reunited as a unit.

The two points moves Edmonton to within one point of the eighth place Blues and leaves them in a four team logjam with the Columbus Blue Jackets, Dallas Stars and Nashville Predators with thirty-five points a piece. The victory also marked the first time this season that the Oilers have won three consecutive games.

Hard to believe a team could go this long without registering some sort of winning streak and still be in the playoff chase but that that is exactly where the Oilers find themselves. That being said, this team has clearly picked the absolute perfect time to start playing their best hockey of the season.
Posted by Oil Drop at 7:49:00 am