No more excuses, it is time to bury the Flames 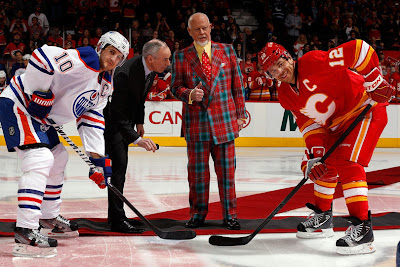 Since the start of the 2010-11 NHL season, the Edmonton Oilers have posted a less than flattering 3-8-2 mark against the Calgary Flames. That dreadful stretch has included a run of nine consecutive victories for the Flames and a 4-3 come from behind win for the boys down south, in the lone meeting between the two sides this season.

With the Oilers on the verge of possibly claiming a playoff spot for the first time since their surprise run to the Stanley Cup Final in 2006 and Calgary having just traded away the face of their franchise in Jarome Iginla, Edmonton must take full advantage of their reeling rivals, starting tonight at Rexall Place.

The two teams come into the match-up headed in opposite directions. While Calgary continues to fall further down the standings, the Oilers are riding the wave of their first three game winning streak of the season and have gone 6-2-2 in the previous ten outings.

Should Edmonton push that streak to four straight and receive a little help on the out of town scoreboard, via the Anaheim Ducks and Minnesota Wild, the Oilers would find themselves occupying the eighth and final playoff spot in the Western Conference.

Flames General Manager Jay Feaster has not exactly had himself a year to remember, starting with the debacle that was the Ryan O'Reilly offer sheet and climaxing with the less than stellar return in the Iginla trade. One would think his mandate for the remainder of the season would revolve around securing Calgary receives as a high a draft pick as possible at this summer's NHL Entry Draft, as well as acquiring as many assets as he can, leading up to Wednesday afternoon's Trade Deadline.

Having said all that, if the Flames could play a part in ruining the Oilers aspirations of qualifying for post-season play, in any manner whatsoever, one would have to guess they would jump at the opportunity. Something which the Edmonton Oilers simply can not allow to happen. There are no excuses. They need to elevate their level of play and show they have the wherewithal to put a team away.

Ralph Krueger's crew is as healthy as they have been all season and are coming off what was arguably their most dominating performance of the season, trouncing the Vancouver Canucks 4-0 on Hockey Night in Canada on Saturday night. Taylor Hall led the charge  upfront, registering a first period hat-trick, giving the talented youngster fifteen points over his last ten games.

Since being reunited with linemates Jordan Eberle and Ryan Nugent-Hopkins, the dynamic trio have collected eighteen points between them, in just three games, after being snake bit as a unit for much of the season. Obviously, Edmonton has won all three of those games and moved themselves right back into the crowded Western Conference playoff picture.

A loss to the Flames in any of their three remaining head-to-head battles, would not only be devastating to the group as a whole but also kill any chances of them reaching the post-season.

It is actually quite simple. They will host Calgary tonight and than make their way down south to take them on one more time on Wednesday evening, following the NHL Trade Deadline. Ten days later, Bob Hartley's gang will make their way back to Rexall Place on April 13th, as the late game in Hockey Night in Canada's doubleheader. Those three games, must be turned into six points.

It is time for this team to take over the Battle of Alberta and put their provincial rivals in their place. The time for excuses are over. The Flames have a long road ahead of them, both on and off the ice. Anything less than a clean sweep for the Oilers, would simply be unacceptable. The time for this team to start delivering is now at hand. Let us see if they sink or swim.
Posted by Oil Drop at 8:35:00 am