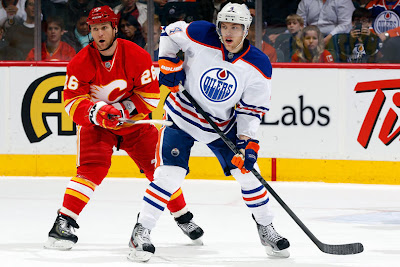 With Pittsburgh Penguins superstar Sidney Crosby currently on the shelf with a broken jaw, you would be hard pressed to find a better player in the entire National Hockey League than the Edmonton Oilers Taylor Hall. After lighting up the Calgary Flames with a career high five point performance, the former first overall selection finds himself seventh in league scoring and his team currently holding down the eighth and final playoff spot in the Western Conference.

On the strength of an eleven point effort from the top line of Jordan Eberle, Hall and Ryan Nugent-Hopkins, the Edmonton Oilers made it two in a row over their provincial rivals, torching the under-manned Flames by a score of 8-2 on Wednesday night.

Nail Yakupov chipped in with the first two goal game of his career and Sam Gagner added his team leading fourteenth of the season, as the Oilers reeled off eight consecutive goals, in winning their fifth straight game. The two points allowed Edmonton to leap frog the idle St. Louis Blues into eighth place in the West but the Blues do have a pair of games in hand.

After watching Calgary jump out to an early 2-0 lead, courtesy of a pair of goals off the stick of Matt Stajan, the Oilers finally woke up and started taking the play to Bob Hartley's crew. Gagner would cut the lead to one, tipping home his first in four games, while Ryan Whitney would draw them level, burying a wonderful cross-ice feed from Hall, at the 12:59 mark.

They kept coming in period two, as they punished the Flames for taking a string of three consecutive minor penalties, scoring on all three power play opportunities. Yakupov would  give them their first lead of the night, wiring home an absolute bomb behind Joey MacDonald, for his eighth on the year and second in as many games.

Just over four minutes later, Hall would pot his seventh goal in six games, giving the Oilers a two goal cushion. Nugent-Hopkins would complete the trifecta of power play markers, beating MacDonald under the bar for his third of the season, after Hall had his initial shot on goal blocked, before reaching the bewildered Flames netminder.

Eberle would turn what appeared to be an already easy victory, into an all-out thrashing, adding a pair of third period goals for his troubles and helping Nugent-Hopkins record his first four point night of the year. It was just one of those nights, in which the Oilers trio of youngsters looked as thought they were simply toying with the Flames.

Yakupov would closeout the scoring potting his second of the night, thanks to slick move from Ryan Smyth off a faceoff in the Calgary zone, to make it an 8-2 final. The two goal effort pulled the former Sarina Sting standout into a tie with teammate Justin Schultz for fourth place in rookie scoring with twenty points, only five back of Florida Panthers forward Jonathan Huberdeau.

As for Hall, what else needs to be said, The kid is flat out carrying this team on his back and has taken his game to a completely different level. He has scored five goals, chipped in with another five assists and a very solid  +6 rating over the last three games, which have all been blow out wins for the suddenly surging Oilers.

Over his past twelve outings, Hall has collected twenty-two points and currently sits seventh in league scoring with forty-one on the season. He currently sits in a tie for fifth place among NHL assist leaders with Joe Thornton and trails only Sidney Crosby and Steven Stamkos in points per game average, with a rather impressive total of 1.24 PPG.

Hall's recent resurgence has also kicked the games of Eberle and Nugent-Hopkins in to gear. After struggling to score with any sort of regularity for much of the season, the duo have caught fire of late. With his two goal effort on Wednesday night, Eberle has now scored five times and eight registered eight points over his last five games.

As far as RNH goes, since missing a couple of game due to illness, the Nuge has returned to his 2011-2012 rookie form. In the six games since returning to the lineup, #93 has collected eleven points, matching his total for the previous twenty-six games. Since the trio has been reunited, the Oilers have gone undefeated and climbed back into the Western Conference playoff race.

Edmonton wasted little team in leaving the Saddledome on Wednesday night, as the head over to Vancouver and prepare for a crucial battle against the Canucks on Thursday night at Rogers Arena.With only twelve games remaining on their regualr season schedule, Edmonton appears to be headed for a battle to the very end, in hopes of securing that final playoff spot for the first time since 2006.
Posted by Oil Drop at 8:07:00 am