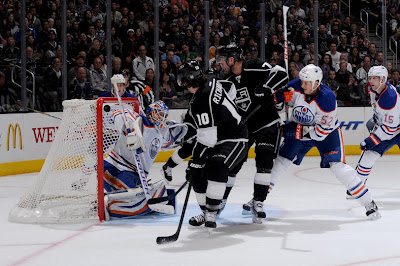 No one said making the playoffs would be easy for the Edmonton Oilers and if Saturday afternoon's affair against the defending Stanley Cup Champions is any indication of what they can expect during the final stretch of the 2013 campaign, they could be in for a bit of a rough ride.

Power play goals from Jeff Carter and Slava Voynov proved to be the difference, in leading the surging Los Angeles Kings to an easy 4-1 victory over a suddenly slumping Oilers side. Jonathan Quick made twenty-three stops in earning his thirteenth win of the year, while Edmonton's Magnus Paajarvi scored his eighth of the campaign in the losing effort.

Mike Richards wasted little time in putting the Oilers behind the eight ball, making the most of a terrible giveaway by Sam Gagner, ripping home his ninth of season at the 1:38 mark. Carter would stretch that lead to two, giving the former Philadelphia Flyers first rounder twenty-two goals on the season.

Edmonton would bounce back with an early marker of their own in period two, as Paajarvi shoveled home his second power play marker of the year, courtesy of a nifty little feed from Nail Yakupov. The former Sarina Sting standout was involved every time he hit the ice and was easily the Oilers best skater on the afternoon.

Ralph Krueger's crew looked to be back in it but that would last all of six minutes. Voynov's point shot found its way past a screened Devan Dubnyk, for his first power play goal of the year and fifth of the season, to restore the Kings two goal cushion. Just over twenty-eight minutes in, Los Angeles held a 3-1 lead on the scoreboard but were dead-locked with the Oilers at fourteen shots a piece.

From that point on, it was a completely different ball game. The play would be in Edmonton's end of the ice for much of the final thirty plus minutes, with the visitors not registering another shot on goal until early in period three. If not for a handful of unbelievable stops from Dubnyk throughout the final frame, the scoreline would have been far worse.

Drew Doughty would closeout the scoring with an empty netter in the final minute, to make it a 4-1 final and send Edmonton to their second consecutive loss, after running off a season-high five game winning streak.

Recently acquired Jerred Smithson made his Oilers debut, playing on a line with Mike Brown and Lennart Petrell. The thirty-four year old centre played just under ten minutes on the afternoon, almost three minutes of which were on the penalty kill. Smithson came as advertised in the faceoff circle, winning seven of nine in the dot, joining Gagner as the only other centre to top the fifty percent mark on the day.

The Oilers will close out their four game road swing with a date against the Pacific Division leading Anaheim Ducks on Monday night. The match-up will be the first of three during the month of April between the two sides, with the other two coming on back-to-back night's at Rexall Place, during the final week of the NHL season.

Depending on the outcome of the Phoenix Coyotes vs Colorado Avalanche game on Saturday evening, Edmonton could see themselves fall back into tenth place in the Western Conference standings, with just ten games remaining on the schedule.
Posted by Oil Drop at 9:15:00 pm