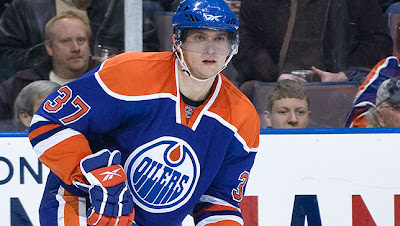 Denis Grebeshkov is one of those players that generally splits a teams fan base. There are those that love the puck moving abilities that the talented Russian defenceman brings to the table and than there are those that could do without watching the mind numbing turnovers and questionable on ice decisions.

He is your typical high risk/high reward blueliner but one general manager Craig MacTavish has always thought highly of. With that said, the Edmonton Oilers decided to take a chance on bringing back the twenty-nine year old for the upcoming 2013-14 season and fans should expect to see the same old Denis Grebeshkov.

The former 18th overall pick of Los Angeles Kings was his usual self during Edmonton's exhibition opener on Saturday night, looking absolutely stunning during stretches and downright horrible during others. He can certainly be frustrating to watch but at the end of the day, he is the player that he is and expecting him to change, at this stage of his career, is nothing more than wishful thinking.

That said, having a guy like Grebeshkov around, to use in a bottom pairing role, should allow head coach Dallas Eakins to put him in situations that best suit his skill set. In limited duty, meaning next to no time on the Oilers penalty kill, the former Olympian could turnout to be a very nice fit.

He would immediately upgrade Edmonton's power play, becoming a regular fixture on the second unit, and along with Ference, add some much needed experience to the backend. Also, adding his puck moving abilities to a third pairing that has generally been in over their collective heads for years, certainly can't hurt.

The Oilers have struggled for so long to find D men capable of transitioning the puck, that it is frankly tough to remember them not doing so. With Jeff Petry and Justin Schultz already in house and the additions of not only Ference and Grebeshkov but potentially Anton Belov and/or Philip Larsen, obviously MacT is wasting little time in trying to address it in the here and now.

As a 15-18 minute a night defenceman that is scheduled to make $1.5 million on a one year deal, it's hard to not like the signing of Denis Grebeshkov. He may not be everyone's cup of tea but he certainly brings a dimension this blueline has lacked for years. Does he have his flaws? Of course but what high risk/high reward player doesn't?

From an organizational standpoint, bringing back #37 is a low risk move. If it doesn't workout, it doesn't workout. No harm done. However, the fact that an attempt was even made to try and upgrade the backend, something Steve Tambellini refused to do prior to 2013, shows they are finally serious about trying to improve the product on ice...and not just talk about it.