Eakins may need Perron and Hemsky to play a different role 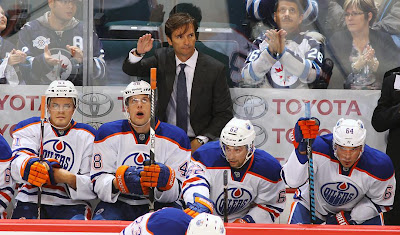 Heading into training camp, almost everyone felt the Edmonton Oilers top six forwards were pretty much set in stone. While Ryan Nugent-Hopkins may end up  missing a handful of games to start the year, the spots on the Oilers top two lines looked to be earmarked for Jordan Eberle, Sam Gagner, Taylor Hall, RNH, David Perron and Nail Yakupov.

With their third and fourth lines lacking any sort of real depth and the likes of an Ales Hemsky potentially sitting there without a real home, perhaps head coach Dallas Eakins will lean towards going with a more balanced attack across the board. One would think it would be rather difficult for the Oilers new bench boss to not run with the Eberle - Nugent-Hopkins - Hall trio upon the Nuge's return to the lineup.

Should that be the case, perhaps a second line of Perron, Gagner and Yakupov isn't the way Eakins decides to go. Like it or not, this team is going to need a line to do some heavy lifting and as it currently sits, that responsibility would have to fall on the shoulders of the RNH trio. While Boyd Gordon was brought on board to take on some of those so-called tough minutes, the remaining forward group is not exactly compiled of guys that are well equipped to play such a role.

Obviously, the coaching staff likes the pairing of Gordon and Perron, as the duo are set to play together for the second consecutive outing. Could it just be a coincidence that they are paired together again? Perhaps but should Eakins and his staff honestly believe they need a defensively responsible line, maybe tonight's trio of Perron, Gordon and Hemsky becomes a legitimate option come October 1st, as first mentioned by Allan Mitchell over at Lowetide.ca in late August.

While neither Hemsky or Perron are considered defensive stalwarts, both have played tough minutes over their respective careers and of the Oilers skilled forwards, they are by far and away the most responsible. Even if the Gordon line could just lighten the load on the top line, it may be worth exploring. Of course, there is one problem with going down that road....who to play with Gagner and Yakupov.

The attractive option would be Linus Omark but that could arguably be the worst defensive line in recent NHL history. With that said, Eakins would likely have to choose between the quartet of Ryan Hamilton, Jesse Joensuu, Ryan Jones and Ryan Smyth. Possibly he gives all four a look and goes with the hot hand.It would arguably make the Gagner unit the club's third line on most nights but both Gagner and Yakupov would still see somewhere in the neighbourhood of seventeen minutes a night, when you include special team minutes.

With most critics and fans openly questioning the viability of a fourth line that will feature one of Will Acton or Anton Lander at centre and some combination of the aforementioned bottom six wingers and possibly one of Mike Brown or Ben Eager, maybe the Oilers seriously consider going with a fourth line that sees five minutes of ice a night(outside of potential special teams time). Coach Eakins has repeatedly hinted at wanting to use his top end guys a lot, which would make caring a low minute fourth line very doable.

The biggest plus in all of this, could end up being a rejuvenated Ales Hemsky. If the Oilers can find a way to keep the veteran winger engaged on nightly basis, despite being given a different role, Edmonton will be a far better team for it. A happy and healthy #83 is generally a bad thing for the opposition.

Dallas Eakins doesn't strike me as the sort of coach that will hesitate to change up his lines, should they not be going on any given night. That being said, you can fully expect the former Toronto Marlies bench boss to put his players in every possible situation to succeed. What the players ultimately do with that opportunity, will be up to them.
Posted by Oil Drop at 7:17:00 pm