Joensuu steals the show, as Oilers spilt with Flames 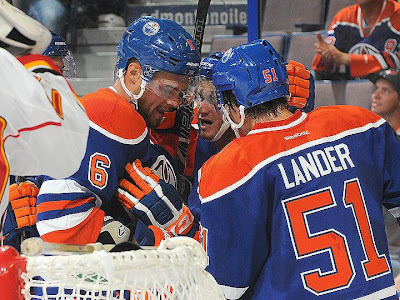 On a night in which the Edmonton Oilers opened up both the home and road portions of their 2013 exhibition schedule, a pair of late rallies from the Calgary Flames sent both teams home as winners and losers on the night.

The Oilers managed to pull out the first of two split squad games between the provincial rivals, earning a hard fought 3-2 win at the Scotiabank Saddledome, courtesy of a late winner from defenceman Martin Marincin. While up in Edmonton, the home side squandered a three goal third period cushion and an outstanding debut from forward Jesse Joensuu, falling to the Flames 6-5 in a shootout.

Ryan Jones would get the Oilers off to a great start down south, tipping home a Jeff Petry point shot behind Flames starter Joey MacDonald to hand the visitors an early 1-0 lead. They would add to their lead midway through period two, when David Perron snapped a quick shot past Joni Ortio, mere minutes after the Finnish  netminder had entered the game.

It was a nice finish from the former St.Louis Blues standout, who was making his Oilers debut on a line with fellow newcomer Boyd Gordon and Jones, to form what was arguably Edmonton's best line on the night.

After forty minutes of play, Edmonton looked to be headed for any easy W but to Calgary's credit, they would bounce back and erase the two goal deficit early in the third. Youngster Emile Poirier would start the comeback at the 2:43 mark, pouncing on a loose puck and ripping it past Richard Bachman, who replaced starter Jason LaBarbera.

Just under four minutes later Mike Cammalleri would level things at two, as Matt Stajan found the the wily veteran with a quick pass from behind the net, as the two-time 30 goal man separated himself from Jordan Eberle. It was ugly play from Eberle, who simply coasted back into his end, paying zero attention to his surroundings.

However it would be the the twenty-three year old who would have the last laugh, as the former 22nd overall pick barrelled down the right side boards to gain the Flames zone, before sending what appeared to be a harmless looking shot on goal.

Unfortunately for the Flames and Ortio, the youngster had trouble corralling it, which was all a hard charging Ryan Hamilton needed to get his stick on it and find a pinching Marincin for the winner.

As the final buzzer went in Calgary, it looked as though the Oilers would be heading for clean sweep of their Saturday evening double dip, as they held a commanding 5-2 lead up at Rexall Place in Edmonton.Taylor Hall, Ryan Smyth and Kyle Platzer all managed to push pucks past Karri Ramo during period one, in what was a less than stellar outing for the twenty-seven year old netminder.

The Oilers 3-1first period lead would only get bigger in period two, as Mark Arcobello slid home goal number four, courtesy of some hard work down low from Joensuu.The Flames would make it 4-2 on lovely finish from defenceman Dennis Wideman, beating Olivier Roy all of twenty-one seconds after replacing Devan Dubnyk.

However, it would take Edmonton all of fifty-nine seconds to get that one back, as Joensuu continued his impressive debut and beat Reto Berra with a quick wraparound and restore the home side's three goal cushion. With just over thirty minutes to play, this one seemed to be all but it over. It was more a matter of how much would the Oilers win by, not if.

Apparently that was the mindset of far too many players entering the third, as the Flames reeled of three straight goal in a span four minutes. Calgary was coming in waves and Edmonton looked to have no response. Much like Ramo at the other end of the rink, Roy struggled for much of night and was unable to give the Oilers a stop when they needed it most. That said, the rookie netminder had little in the way of support over the final twenty minutes of play.

Calgary would complete the comeback in the shootout, as Berra stoned both Linus Omark and Hall with a pair of huge pad saves, while Roy was less than stellar at the other end of the rink. Both Sven Baertschi and Roman Horak made it look far too easy, as the Oilers netminder looked to be in way over his head.

It was an up and down night for Hall, who found himself centering the veteran duo of Ales Hemsky and Smyth. While the former first overall pick performed well in the faceoff dot and made a number of solid defensive plays in his own end ice, it was a struggle for much of the night,

Not surprisingly, Hall did look lost during various points and only complicated matters further by turning over the puck and taking three minor penalties, including one in overtime. That said, it was his first game at a new position and you can bet on there being more growing pains, should the Oilers decide to continue with the experiment.

Also, that fact Hemsky wasn't around for the final two periods, as the Czech winger was feeling under the weather, didn't help in the least. The trio of Smyth, Hall and Hemsky were dominant during the opening stanza but the line created little after #83's departure.