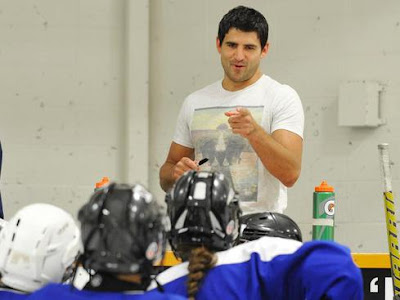 It was arguably the worst kept secret in hockey. Everyone knew Edmonton Oilers GM Craig MacTavish had his eye on Boyd Gordon. The hope was the twenty-nine year old would opt for unrestricted free agency, in search of a big pay day, rather than return to Phoenix and remain a member of the Coyotes.


On July 5th, the former seventeenth overall pick of the Washington Capitals decided to do exactly that. With the situation being what it was, MacT was more than happy to slightly overpay Gordon, if it ensured he would get his man. From a statistical standpoint, it will be tough for him to live up to his 3 year/ $9 million deal but than again, his scoring ability isn't the reason the Oilers brought him on board.

When the organization made the decision to part ways with both Shawn Horcoff and Eric Belanger, they instantly created an opportunity that was impossible for Gordon to ignore.. From a financial standpoint, $3 million is a pretty nice chunk of change for a guy with a limited offensive ceiling. At to that, the potential of playing major minutes on  a nightly basis and suddenly the signing looks to be a no-brainer for both sides.

There are those out there that tend to view Gordon as a fourth line centre but since joining the Coyotes prior to the 2011-12 campaign, he has been nothing but a solid third line guy. After being used as nothing more than a penalty killer over his final two seasons in Washington, the native of Unity, Saskatchewan found a home in Phoenix under Dave Tippett.

From the moment he arrived in the desert, Gordon was used in a shutdown role by Tippett and did nothing but excel. Despite being a fifteen minute a night guy, three of those generally coming on the PK, the 6' 200 pound pivot was still among the Coyotes shift leaders upfront. More often than not, he was saddled with doing much of the heavy-lifting in the defensive zone and allowing the likes of Martin Hanzal and Antoine Vermette to see some softer minutes from time to time.

That won't change in Edmonton, as head coach Dallas Eakins will look to the nine year NHL vet to do the same for Ryan Nugent-Hopkins and Sam Gagner.  Back in 2011, it looked as though Belanger would help fill that role with Horcoff but unfortunately for the Oilers, that never materialized. The veteran journeyman never appeared comfortable during his time in the Alberta capital and was thankfully sent packing.

In Gordon, it appears as though MacTavish has found that experienced bottom six guy who wants to be part of the solution and help in any way he can Frankly, this lineup is starving for a player with his skill set but if that player is unwilling to accept his role within the group, they generally turnout to be nothing more than a distraction. Which is exactly what happened with Belanger.

Be it on a line with an offensive player like Ales Hemsky or David Perron, who Gordon has seen regular duty with earlier in training camp, or the Ryan Jones, Jesse Joensuu or Ryan Smyth's of the world, he will play a key role for Edmonton in 2013-14. That said, he will need to chip in from time to time on the scoresheet and while he has never put up offensive numbers at the NHL level, being a 25 point guy , with this roster, isn't out of the question.

Should Boyd Gordon post a 25 point season and continue delivering the level of play he traditionally has, the Edmonton Oilers could very well find themselves in the thick of things in the Western Conference's Pacific Division. With the likes of Jordan Eberle, Taylor Hall, Ryan Nugent-Hopkins and Nail Yakupov all a year older and expected to take on even bigger role come October 1st, it looks as though Gordon may have picked the perfect time to make the jump over to the Orange and Blue.