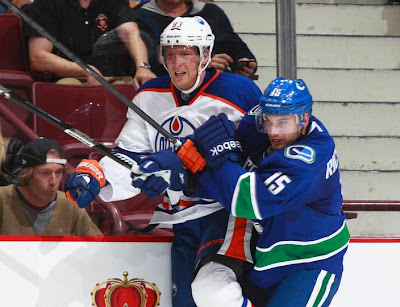 The Edmonton Oilers wasted little time to familiarize themselves with the Vancouver Canucks and one Roberto Luongo. After torching Luongo and the Canucks for seven goals in the Oilers 2013 season finale, Edmonton continued their recent domination of one of the league's premier netminders, scoring four first period goals in just over seven minutes, en route to an easy 4-1 victory over their Pacific Division rival.

Jordan Eberle led the charge upfront with a goal and two assists, while Boyd Gordon chipped in with a pair of helpers for good measure. Netminder Devan Dubnyk was rock solid in between the pipes, stopping twenty-five of the twenty-six shots fired his way, as the Oilers bounced back from a rather lacklustre performance against the Winnipeg Jets on Tuesday night, with what was arguably their "C" squad.

With that being the case, Edmonton came out like gang-busters, out shooting the Canucks 9-0 over the opening seven and half minutes of play and securing a early three goal cushion. Eberle would get things started at the 4:49 mark, sneaking a quick little wraparound, albeit one he basically whiffed on, past a down and out Luongo to make it 1-0.

Martin Marincin would extend the lead just over two minutes later, as his seeing-eye point shot found its way through some traffic and into the back of the Canucks net. It was the youngster's second goal of the preseason, as he continues to impress and earn a longer look, before eventually making his way to Oklahoma City to start the 2013-14 campaign, That said, the former second round pick has now scored the game-winner in both of the Oilers exhibition victories.

David Perron would make it three straight for the visitors, as his bad angled shot somehow made its way through the Nucks starting netminder, in what was as ugly a goal as you will see. While it might not have been the goal scorers goal Perron snapped home against the Calgary Flames in the opener, the former St. Louis Blues winger is not only delivering on the score sheet but exciting fans with what he might be capable of during his first year in Orange and Blue.

Jesse Joensuu continued to show signs of possibly being a guy who is capable of lighting the lamp from time to time, scoring what was also his second of the exhibition schedule, to make it 4-0 for the Oilers. The big Finn was in the right place at the right time, beating Luongo between the wickets with a wide open look from the slot, mere seconds after the Canucks starter made a brilliant stop off a one-timer from Mark Arcobello.

Vancouver would finally stop the bleeding at the 13:06 mark, as an absolutely brutal giveaway from Marincin, led directly to Brendan Gaunce eventually banging home a loose puck up and over Dubnyk. That goal would make it 4-1 and with roughly forty-seven minutes of hockey still to play, one could only guess where this was going to finish.

Unfortunately, the hope for a high-scoring back and forth final forty minutes never materialized, as both teams tightened up defensively and limited the amount of quality scoring chances. That said, there were still some opportunities generated but this time around, neither Luongo nor Dubnyk would break.

The Canucks #1 was very good in the early stages of period two, making a number of timely stops to keep the Oilers within striking distance but in the end it mattered little. The Canucks carried the play for much the the middle stanza but were unable to sneak another one past Dubnyk, who looked to grow more confident with each shot he faced.

After struggling with his rebound control during much of the opening twenty minutes, Edmonton's undisputed #1 was stellar in closing this one out, While it may have just been a preseason game, the fact Dubnyk did not allow that "next goal against" to give both the Canucks and their fans some sort of life, is a very positive sign moving forward.

On night in which almost everything went the Oilers way, the play of defenceman Darnell Nurse was likely the highlight of the bunch. The former seventh overall pick was downright fantastic against a lineup that featured likes of Daniel and Henrik Sedin. The kid logged almost 23 minutes of ice, trailing only Justin Schultz at 23:56, and looked like a savvy veteran in doing so.

He was Edmonton's best blueliner at even strength and teamed with Nick Schultz to form a solid duo on the penalty kill, Nurse was among the team leaders in hits and blocked shots and probably most impressive of all, led all Oilers in takeaways on the night with four. All and all, it was a brilliant performance from the eighteen year old rearguard.

With the win, the Oilers move to 2-1-1 on the preseason, as they reach the midway point of their eight game exhibition schedule. They will have the next couple of days off before returning to action on Saturday night at Rexall Place, against these very same Vancouver Canucks on Hockey Night in Canada. Look for Dallas Eakins to make a handful of roster moves prior to the rematch with the Canucks, as the club looks to trim their numbers heading into the final week of training camp.