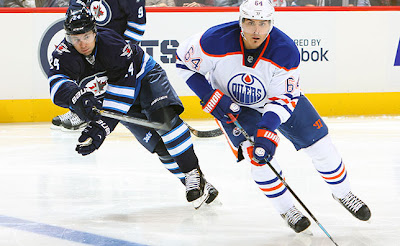 Despite a late third period rally and a solid performance from his starting netminder, Dallas Eakins did not get the result he was hoping for in his debut behind an NHL bench. While third period goals from Mitch Moroz and Philip Larsen made it close on the scoreboard, this was a game the Edmonton Oilers had no business being in, falling 3-2 to the Winnipeg Jets in Tuesday night NHL exhibition action.

If not for the work of goaltender Richard Bachman, who was left to fend for himself for much of the night, this one would have been over early. Was it total domination on the part of the Jets? It certainly was in period two, as they out shot the Oilers 16-8 and were in complete control from the drop of the puck. That said, Winnipeg wasn't that good but Edmonton did have far too many passengers.

Former Chicago Blackhawk forward Michael Frolik opened the scoring midway through period, roofing a loose puck past Bachman, giving the Jets a well deserved 1-0 lead. They would extend their lead before the period was out, courtesy of a goal-mouth tap in from Carl Klingberg and a lovely feed from Eric Tangradi. With twenty minutes to play, this one looked to be all but over


To the Oilers credit, they showed up for period three and had Winnipeg on their heels for much of the frame but were unable to get an early one past Jets starter Ondrej Pavelec, who stoned Nail Yakupov on a partial breakaway early in the third. Despite being hemmed in their own end, Anthony Peluso would make it 3-0, as blueliner Philip Larsen lost his mark, leaving the big winger unmarked for an easy tap in.

Edmonton would hit the scoresheet about a minute later, as Edmonton Oil Kings forward Mitch Moroz slid home his first of the preseason into a yawning cage, after a brilliant cross-ice feed from Larsen. The former Dallas Stars rearguard continued to makeup for his earlier blunder, chipping a shot up and over a helpless Pavelec, after some hard work down low from the Yakupov-Omark duo. The goal came all of twenty-three seconds after the Moroz marker and suddenly the Oilers had life.

Despite coach Eakins' decision to roll the dice and pull Bachman with roughly two minutes remaining on the game clock, the Oilers were unable to complete the comeback, in spite of Edmonton buzzing around the Jets goal in the dying seconds.

Defenceman Oscar Klefbom made his debut against the Jets on Tuesday night and as expected, the former 19th overall pick had his best outing to date. While the big Swede did struggle during the Young Stars Tournament in Penticton, the fact he looked more comfortable when surrounded with better players, is not overly surprising. For a guy like Klefbom, coming from the Swedish Elite League, the more structure the better,

Bachman was by far and away the best Oiler on the night, making 26 stops and giving his team a shot at pulling off a third period comeback. Despite his error on what was ultimately the game-winner, Larsen was solid from start to finish, as he continues to make a push for a roster spot come October 1st. He continued to keep his game simple, transitioning the puck up ice with ease and routinely joining the rush up ice.

Other Oilers who looked good included forward Tyler Pitlick, Nail Yakupov, at least in the third period, and the duo of Jeff Petry and Ladislav Smid. The loss drops Edmonton to 1-2 for the preseason but they will look to even their record tonight in Vancouver, as the rest of the Oilers squad (including the likes of Taylor Hall, Jordan Eberle, David Perron and Devan Dubnyk), take on the Canucks at Rogers Arena.