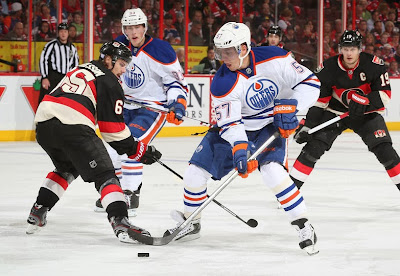 Netminder Devan Dubnyk made his second consecutive solid start, stopping 35 of the 36 shots fired his way, in earning his first victory of the season. After struggling badly through his first four starts of the year, Dubnyk looks to have relocated his game after taking a seat for games against both the Washington Capitals and Pittsburgh Penguins earlier in the week.

Much like the New York Islanders had done during their Thursday night win against Dallas Eakins' side, Ottawa seemed intent on firing as many pucks as possible on Dubnyk. While the Sens may have been hoping to get some ugly rebounds from the Oilers goaltender, they instead allowed him to get a feel for the puck after a couple of early hiccups.

Eberle wasted little time in getting the visitors on board, using Nail Yakupov as a decoy on a two-on-one before making a nifty little move and finish on Ottawa starter Robin Lehner. It was a gorgeous play from the former 34 goal man and one that got Edmonton off to the start they were hoping for. While the Senators continued to simply fire pucks from all over the ice, the Oilers would continue to be opportunistic, capitalizing on a mistake by the Sens young netminder.

Lehner completely misplayed Yakupov's shot from the slot, coughing up a juicy rebound that Nugent-Hopkins gladly deposited into the back of the net for his third goal on the season. The entire sequence came courtesy of some great work along the sideboards from the Nuge and Jordan Eberle to win a puck battle before finding the talented Russian for an open look in the slot.

Heading into the first intermission, the shot clock may have read 15-7 for the Senators but the Oilers were in complete control on the scoreboard. The second period would not produce much in the way of scoring chances, as both teams did next to nothing with a pair of power play chances, but both goalies would be called upon to make big stops for their respective sides.

Dubnyk would make his best stop of the period with Edmonton on the power play, stoning Kyle Turris with a huge blocker stop on a two-on-one break to preserve the visitors two goal cushion. Lehner would return the favour in the dying minutes of the period, robbing Ryan Smyth with an absolutely brilliant pad stop, after a lovely feed from Nugent-Hopkins.

Unfortunately for the Oilers, they would lose the services of Hall midway through the period after the star winger was kneed along the sideboards by Ottawa's Eric Gryba. While it wasn't a dirty play per se, the Sens forward caught Hall on the side of the leg with a knee-on-knee blow. After somewhat slumping to the ice, the former first overall pick sprung up and took a half-hearted swipe at Gryba.

While the on ice official saw no need to hand Gryba a penalty for his initial hit, he did whistle the Oilers #4 down for his attempted slash. Edmonton managed to kill off the penalty and Hall's night would officially come to an end mere seconds later. Upon returning to the ice, Hall would drive into the Sens zone and take a shot on net and basically crumble to his knees. Just like that, Dallas Eakins had lost the services of his premier player for the remainder of the afternoon.

Eakins was unable to confirm or deny what exactly happened to his star winger but did say "I know it's his knee but I don't know the severity of it". After getting Nugent-Hopkins back into the lineup after off-season shoulder surgery and Sam Gagner roughly a week or two away from returning from a broken jaw, the Oilers looked as though they were on the verge of returning to full health for the first time in ages. Well...so much for that.

Edmonton were handed a glorious opportunity  to put this one to bed early in the third but proceeded to squander a full two-minute 5-on-3 without producing a single quality chance on goal. The Oilers would go 0-for-6 on the man advantage generating all of four shots on net and allowing the Senators to stick around until the very end.

Fortunately for them, Ottawa's wasn't any better, as they went 0-for-5 on the afternoon, including one that came immediately following Edmonton's two-man advantage. Dubnyk would continue to frustrate the Sens, making a splendid pad save off Cory Conacher to keep the home side off the scoresheet.

Chris Neil would finally break the shutout bid with just under six minutes to go, poking home a bouncing puck on what was nothing more than a bad break for Dubnyk and a lucky bounce for the Senators. To the Oilers credit, they would shut the door from that point on, holding Ottawa at bay without the need of any sort of heroics from their starting netminder.

Nugent-Hopkins would seal the deal at the 19:25 mark, sliding home his second of the afternoon to make it a 3-1 final. The win not only brought an end to the Oilers five game losing skid but also marked their first win on their season-high six game road swing. Edmonton will now head to Montreal to face the Canadiens on Tuesday night, hoping to salvage what has been rather eventful time away from Rexall Place.
Posted by Oil Drop at 5:54:00 pm