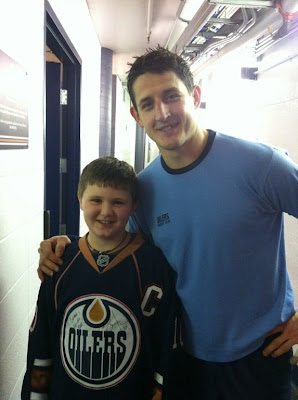 Oilers fan Cooper Beamish, is in the City of Champions this weekend, to take part in a minor hockey tournament with his team, the Fort St.John Atom Flyers. While in town, the youngster was lucky enough to have time to attend last night's game against the Columbus Blue Jackets. Cooper's favourite player has always been Shawn Horcoff and after the game, the kid got an opportunity to meet the Oilers captain.
Cooper, who plays forward and wears the #12 because number ten was taken, had seen Horcoff play in person before but this was the first time he got to meet his hockey hero in person. What made the meeting special, was Cooper, who is from Fort St.John, BC, had no idea he was going to be meeting Shawn and #10 didn't disappoint. It's not every day that a kid gets to meet his favourite player, especially in this type of setting. After taking the time to talk with Cooper and thanking him for all his support, Horc signed his jersey and posed for a picture. As you can imagine, ten year old Cooper, was pretty pumped about the experience.
It's not something many players would do, following a tough night's work, but Horcoff obviously gets it. By taking just a few moments of his time, to meet with one of his fans, he probably made young Cooper's year and I am guessing, you still can't wipe that grin of the kids face.
Posted by Oil Drop at 4:34:00 pm

Email ThisBlogThis!Share to TwitterShare to FacebookShare to Pinterest
Labels: horcoff