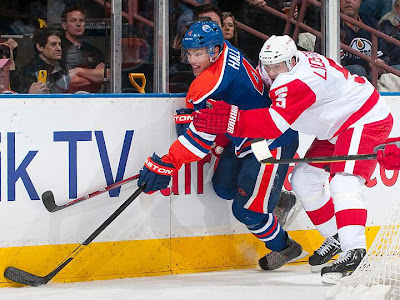 Edmonton came out fast to start the game but it was the Red Wings who opened the scoring, when former Oiler Dan Cleary neatly deflected Jakub Kindl's point shot past Nikolai Khabibulin, to stake the visitors to a 1-0 lead just 4:33 into the opening stanza. That was it for scoring in the first, although both teams generated chances late in the frame but were unable to sneak one past Khabibulin or Red Wings netminder Jimmy Howard.

Edmonton pulled even early in the second, when Ryan Jones came up with another big goal. Jones has become Mr.Breakaway for this team and he managed to get the job done once again, slipping a shot past Howard to tie things up. Both sides exchanged chances throughout the second but much like the first, both goaltenders were on their game and kept the score 1-1.

Detroit broke through at the 14:36 mark, when Jiri Hudler deflected another point shot past Khabibulin to give the visitors a 2-1 lead. The Wings had numerous point blank opportunities but were unable to beat the Oiler netminder on a clean chance. So they did what any good team does, they started sending guys to the net in hopes of making the Russian puck stoppers night as difficult as possible and it worked to perfection.

To the Oilers credit, they came back and evened things up before the second period was up. After booting the puck around during their late period power play, Taylor Hall made a nice play to keep the puck in the Wings zone and fed Ryan Nugent-Hopkins for a good look but his shot was blocked. Unfortunately for Detroit, the puck just sat in the middle of the ice after the block and was just sitting on a tee for an incoming Jordan Eberle. The second year winger took full advantage of the friendly bounce and proceeded to rip a bullet past Howard with 0.5 seconds left on the clock.

In the third period, Detroit managed to slow things down and for the third and final time, took the lead. Drew Miller deflected a beautiful slap pass from Nicklas Lidstrom past Khabibulin with less then five minutes to play to give the visitors a 3-2 lead. All three Red Wing goals were on deflections and left the Oiler netminder no chance on any of the goals.

Edmonton was given a gift late in the third when Niklas Kronwall took a delay of game penalty with three minutes to play but the Oilers did not even manage to get a shot on goal. The had opportunities but the Wings collapsed their box and managed to knock down any attempted shots on goal.