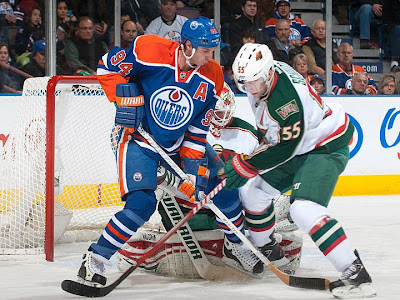 Minnesota came into last night's game, losers of their previous five and have recently been hit hard by the injury bug. The Wild are not the deepest of teams to begin with but with their best player Mikko Koivu out of the lineup and forwards Devin Setoguchi and Guillaume Latendresse also out due to injury, Minnesota's forward group looked more like an AHL roster then an NHL lineup. To Edmonton's credit, they came out hard and absolutely dominated the first thirty minutes and were rewarded with a 4-0 lead.

The Oilers out shot the Wild 20-3 in the first period and if not for goaltender Niklas Backstrom, this one could have been out of hand early. That being said, Edmonton still managed to beat the Finnish netminder twice in the opening stanza. Red hot Jordan Eberle opened the scoring at 15:57 mark, when he intercepted Clayton Stoner's clearing pass and made an absolutely sick toe drag move around Nick Schultz and snapped a bullet past Backstrom, to give the Oilers the lead. The goal was the talented wingers fourteenth of the season and sixth on the man advantage.

Less then three minutes later, Ryan Smyth finally lit the lamp after going eleven games without finding the back of the oppositions net. In typical Smyth fashion, the veteran winger stuffed a quick wrap around past Backstrom, before the Wild netminder could slam his pad up against the post.

They could have made it a three goal lead, when Taylor Hall was awarded a penalty shot with twelve seconds left in the period but the Minnesota goaltender stoned the Oiler forward, to keep the score 2-0 after one. Hall seemed to have have nothing left in the tank after a lengthy but productive shift.

The visitors started the second on the power play after Ben Eager was assessed a boarding penalty at the end of the first. While Minnesota had the man advantage, it was the Oilers that generated the best scoring opportunity and they were rewarded with their fourth shot handed goal of the season. Lennart Petrell picked up a lose puck in the Wild end and ripped a shot under the bar and past Backstrom, for his third on the campaign. Just like that, the lead was now three.

Less then two minutes later, Eberle made a quick deke that froze the Wild netminder and allowed the winger to deposit his second of the night into the yawning Minnesota cage. That made it 4-0 for the Oilers on the score sheet and 22-3 on the shot clock.

To the Wild's credit, they picked their game up and made Nikolai Khabibulin earn his pay cheque the rest of the way. The Edmonton goaltender made a number of quality stops in tight, the best being an all out robbery of pest Cal Clutterbuck, early in the third period. Minnesota had two lengthy power plays over the final twenty minutes but the visitors were unable to beat the Russain netminder.

Sam Gagner took a high-sticking double minor late in the second and just after killing off the Gagner penalty, Petrell was assessed a five minute major and a game misconduct, for shoving defenceman Marek Zidlicky into the end boards. It was an ugly play and Petrell may find himself sitting on the sidelines for a game or two because of it. While the feisty wingers intent was not to send Zidlicky head first into the boards, the play was still a dangerous one and the referee's made the right call. Regardless of the intent, the responsibility on that play is on Petrell and he made a bad decision.

Edmonton manged to kill off the five minute power play but Dany Heatley scored just seconds after, to break Khabibulin's shutout bid. That was the only puck the visitors could slip past the Oilers puck stopper, despite coming back to even the shot clock to thirty-one aside at the final buzzer.

The win sends Edmonton into their brief Christmas break on a winning note and with the World Junior Championships starting up on December 26th, the Oilers are headed out on their longest road trip of the season. The team will start the trip against the Canucks on Boxing Day and will then be off to face the Wild, Islanders, Hawks, Sabres, Blues and Stars. They will play all seven games in thirteen days and then have three days off before returning to Rexall Place on January 11th, when they take on the New Jerey Devils.