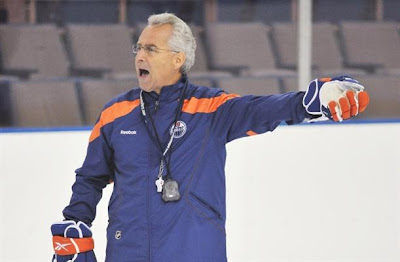 For the most part, I would have to say that Renney has done a great job with the hand he has been dealt. This club started the season with a blueline that many considered one of the worst in the league and a roster that has ten players that were either entering their first or second season in the league. When you consider the holes that they had coming into this season and you add so much youth into the equation, one would assume that more growing pains were ahead. Oddly enough, the season started off just the opposite. This team was winning and winning a lot. They were beating all comers. Be it the mighty Pittsburgh Penguins or cellar dwellers like the Colorado Avalanche, Edmonton was finding ways to get the job done. Suddenly what many felt would be another year of development, turned into a "we are good enough to win right now" mentality and with that, the expectations for this club changed.

While I was as surprised as anyone at how good this team started, I was one who expected them to compete for much of the season but ultimately fall short of making the playoffs. That being said, if you had told me that this team would have lost Ales Hemsky in the first period of game two and started the season with the blueline that they did, my expectations wouldn't have been for them to be as good as I thought they would be. This team had many players step their game up early in the season and that along with some lucky bounces, had as much to do with their success as anything.

Having said that, Tom Renney and his coaching staff has to be given a ton of credit for getting his players to buy into a more structured system. Is it the most attractive thing to watch? Usually not but in order to be successful into today's NHL, there has to be some sort of structure to a teams game. The players bought in and they were being rewarded with results and that's what most players want. Of course they all want to do well on a personal level but ultimately they play this game to win and they were doing just that.

Fast forward to present day and the Edmonton Oilers currently sit twelfth in the Western Conference and are six points out of the playoffs. They have taken a huge step back of late but that was to be expected and injuries to a player like Taylor Hall didn't help matters. So now this team sits at a crossroads of sorts with their head coach in the eye of the storm. As much as these players are tired of losing, this coaching staff wants nothing more then to turn this thing around immediately..While I fully understand that mindset, they must remember that it is all well and good to go out and try and win as many games as they can but the goal must still be the development of their youngsters.

Tom Renney is like most coaches, he tends to lean on his veteran players and sometimes he does it to a fault. Renney often talks about ice time being the thing that players covet most and that they have to earn that ice time. In my mind, players like Hall, Jordan Eberle and Ryan Nugent-Hopkins have earned their time and they are at the stage in their development, where they need to be given more responsibility. While on some nights you could question the amount of ice the youngsters receive, more often then not, they have played a fair amount on a nightly basis. Though some nights those numbers look better then they actually were and Saturday nights game in San Jose was a perfect example.

At the end of night you look at that line and see that they all had over seventeen minutes of ice time and think, they really couldn't have played much more. While they should probably be closer to the nineteen minute mark on a nightly basis that wasn't the problem against the Sharks. The problem was, that ten minutes into the game they had played all of two minutes and that has been happening far too often. Heading into the third period with the game tied, you would have thought they would have tried to get them out as much as possible as they were the only line going on the night. Instead they saw the ice a couple of times the first six minutes and not surprisingly, the Sharks had regained their momentum and taken a 3-2 lead.

Instead  of using that trio to dictate the game to opposition. this coaching staff continues to try and "shelter" them and plays this teams veterans far too much. All three of those kids are accustomed to playing a lot and yet they go long stretches, in almost every game, where they don't see the ice. Most teams want to get their best players out on the ice as much as possible but the Oilers would rather be selective with those minutes and it makes no sense. They don't need to be sheltered, they need to be set free. Yes they are going to make mistakes but that is the only way they are going to learn. This coaching staff has to learn to live with that because they sure seem to be alright with mistakes coming from their veteran players...difference being, is the kids well put pucks in the net to offset their miscues.You often here the coaches or veteran players talk about how the team is a young group and that they need to learn to not make so many mistakes. Problem with that, is the majority of hiccups come from the vets on this team and not the kids. The accountability level seems a little off . While veteran players have earned the right to be given some rope to play with, coaches sometimes go overboard on what the allow them to get away with on the ice. In my mind, that has clearly happened this season in Edmonton.

Tom Renney is in a tough spot. He needs to find a way to ice a competitive team while ensuring the young core are developing at the rate necessary for them to one day become stars in this league. For the most part, he has been able to accomplish just that but if he could just loosen the reigns a little more, he would be repaid with a few more W's in the win column. At this stage of the game, Renney is the right man for the job but if this team is once again sitting near the basement of the NHL standings at season's end,  I would be stunned to see the coach return for the 2012-12013 campaign.
Posted by Oil Drop at 8:17:00 am