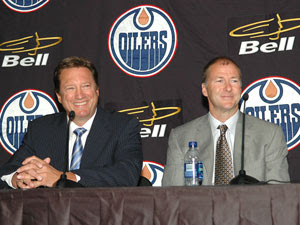 Edmonton's fast start to the 2011-2012 campaign revolved around a few things, most notably being an unconscious goaltending performances from Nikolai Khabibulin on a nightly basis. They were also the benefactors of some timely bounces and goals and hence found themselves five games over .500 at the eleven game mark. Every thing was going the Oilers way but that changed when they lost the final three games of a tough five game road trip in early November. That being  said, they club came home and played a stinker of a game against the Ottawa Sentaors to make it four straight but they then rebounded to win three of their next four, including a 9-2 thrashing of the mighty Chicago Blackhawks. During this stretch, the club was hit hard with injuries to their backend and to make matters worse, they lost Taylor Hall to a shoulder  injury.

As soon as Hall went down, the team started back on their losing ways. While the talented winger was out of the lineup, Edmonton went 2-5-1 when  you include the game against Colorado that he was injured. Problem being, that Hall has now been back in the lineup for the past three games and has been their best skater by a wide margin but they still keep losing. If your franchise player returning from injury doesn't turn things around, then one would think it is time to look elsewhere for solutions.

Like most teams, the Oilers have holes throughout their lineup but none of them are surprises to anyone that follows this team, on a somewhat regular basis. The three clearing weaknesses being:


While a major overall can't be made mid-season, players that look disinterested or will not be here beyond this year, should be moved. There comes a time when an organization has to decide if the players they have in place are the right pieces and the Oilers are at that point. The idea of waiting until the trade deadline is nice and all but this team needs help now and if the goal is to truly fight for the playoffs, the time has come for Steve Tambellini to make a move.

Of late, this club has been having major issues getting production from any not named Eberle, Hall, Jones and Nugent-Hopkins. That being said, this team has players in place that should be able to provide some  secondary scoring but they simply are not doing it. They could easily look at bringing in a player like a Kyle Okposo, as eluded to here, while still staying competitive this season. Adding a player with size that can play anywhere in the top nine is what this group needs and bringing in some new blood is rarely a bad thing. While, the three youngsters this team has added over the last two seasons are pretty special players, their attitudes and "want" to win has had a very positive effect on this teams dressing room.

The biggest area of concern that continues to be ignored, is the blueline. The lack of urgency Tambellini has shown in improving the teams defence is both concerning and confusing. For the first month of the season, they played very well as a group but the mistakes they were making were being covered up by their goaltender and with the type of chances Edmonton gives up on a nightly basis, a netminder can only do so much. Add to that, the long term injury to Cam Barker along with the continued struggles of Ryan Whitney to find his game and the Oilers poor performance on the back end should surprise no one.

That being said, this club is in almost every game and while a large part of that has to do with the kids and the continued strong play from their veteran netminder, the fact remains that they are in nearly every game. That is why I find it so puzzling that Tambellini hasn't made a move as of yet. What more does he want out of these players? Sure there is room for improvement but it's clear that the current group needs help and that's where your GM should come into the picture.

What kind of message does it send your players, when you just sit back and allow the team to continue too struggle? In my mind, it's not a good one and it is a path that can easily lead to your players acceptance of  losing. Once a losing environment is in place, it is very difficult to turn around and that can't be allowed to happen here. Players on the whole, do not like to lose and they appreciate when their organization goes out and tries to improve the team and that is something that is missing from the current Oiler management team. They have assests to move that can help improve this club without destroying it's future but Tambellini and company seem reluctant to do so and it is rather perplexing.

Edmonton is coming dangerously close to falling out of contention for a playoff spot in the West. They are currently eight points back but if they continue on their losing ways, that can become fifteen points in a hurry. Coming into this season, the organization said the goal was for the club to compete for the playoffs. To this point, they have managed to do just that but in order to make that a reality for the entire campaign, these players need help from their General Manger. Steve Tambellini's current approach of standing pat and waiting isn't the answer...that is unless the organizations real goal was to try and secure another lottery pick.
Posted by Oil Drop at 8:25:00 am