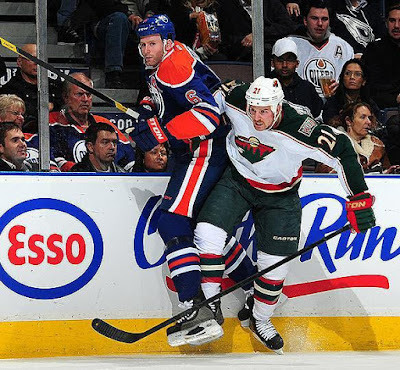 With Ales Hemsky missing practice on Tuesday, due to illness, all signs are pointing to the Czech forward not being in the lineup against the visiting Minnesota Wild. Coach Tom Renney hinted after practice that Hemsky was told to stay home for his sake and the for the sake of the team, as he was obviously quite contagious.

That being said, Dan Tencer has just tweeted that Hemsky is back at practice this morning and on his regular line with Shawn Horcoff and Ryan Smyth. If Ales is ready to go, you would have to think that Lennart Petrell would likely be a healthy scratch with Darcy Hordichuk drawing back in.

Status quo on the blueline, which usually isn't a great thing  but against a beat up Minnesota squad, the Oilers D should be able to hold their own. This will be a nice change of pace for a group that has had their hands full the last couple of games, against Detroit and San Jose.

Khabibulin was once again spectacular for the Oilers against the Red Wings on Monday night and he will to continue his strong play against the Wild on Thursday night. The veteran netminder has played well against the Wild this season but sits with a 1-0-3 mark, losing all three games in the shootout.