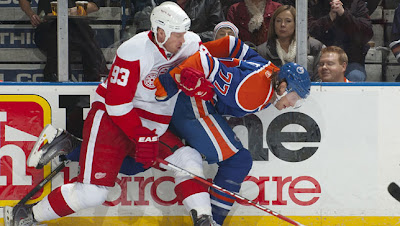 As good as that top line looked against the Sharks o nSaturday night, this team may not be able to leave them together. With no other line being able to generate any sort of offence on a consistent basis, you would think that the kids will have to be split up. Taylor Hall is more then capable of creating chances on his own and as I have mentioned in the past, Ales Hemsky has played his best hockey of the season when he and Hall have been on the same line.

That being said, the Oilers will be leaving the kid line intact for at least one more game and will once again reunite the line of Hemsky - Horcoff - Smyth. That means Sam Gagner will move back to wing and play alongside Eric Belanger and Ryan Jones.

The longer Steve Tambellini take to bring in a top flight defenceman, the more Tom Gilbert and Ladislav Smid will struggle. The duo have been outstanding this season but they are starting to break down. They are being forced to play minutes that they simply can't handle over an 82 game schedule.That being said, the way things currently sit this coaching staff has no other option but to continue to pile the minutes on. Management needs to address this issue and in a hurry.

Whitney is coming off  his worst performance of  the season which makes this situation that much worse for the coaching staff. I am sure they would love to lighten the load on Gilbert and Smid by giving Whitney more minutes but with his game being what it is, he clearly can't be trusted to take those minutes on, at this time.

The Russian netminder was simply outstanding on Saturday evening in San Jose as he made numerous huge saves that kept his team in the game. Unfortunately for Khabby, his teammates were unable to get him the W but it was no fault of the veteran puck stopper.
Posted by Oil Drop at 12:18:00 pm