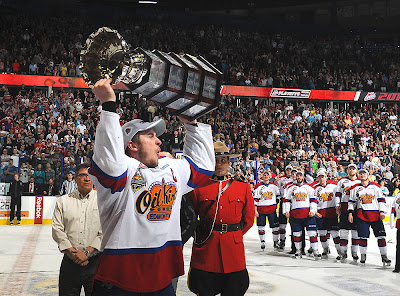 With their biggest crowd of the season of 12,514 in the seats and a sense of excitement in the air at Rexall Place, the Oil Kings were hoping to give the fans something to cheer about. It sure didn't take them long, as they would open the scoring 1:51 in, when Rhett Rachinski would knock in his seventh of the playoffs. The Winterhawks defence  allowed the twenty year old forward to take not one but three whacks at a loose puck, before finally getting the biscuit past netminder Marc Carruth.

It was just the start Edmonton needed, after losing a tough one Portland on Saturday night. The goal seemed to settle the Oil Kings down as they played a nearly flawless period of hockey, while sucking the life out of Portland. You would have been hard pressed to find an Edmonton error, outside of allowing a late scoring chance to Ty Rattie that Laurent Brossoit easily snagged out of the air.

Before the period was out, Tyler Maxwell would snipe his fifth of the post season, on a two-on-break, with eighteen seconds to go in the opening period. As explosive as this team's youngsters are, it was their twenty year old vets who helped carried the load from the drop of the puck.

Just like the Oil Kings opening marker, the second goal was a back breaker for the visitors. As bad as Portland looked in the first period, coming back from one goal deficit on the road in a Game Seven is far different then trying to crawl back from a two goal bulge...especially when they looked as though they had been skating in quicksand through the opening stanza.

It was much of the same in period two as the Winterhawks continued to look lost and Edmonton kept pouring it on. Two more odd man rush goals in the opening ten minutes from Michael St.Croix and T.J. Foster making it 4-0 for the Oil Kings. Oliver Gabriel would cut the lead to three, just over a minute after Foster scored but that would be all Portland could muster on the night. The Oil Kings were simply too good and for the second consecutive year, the Winterhawks would fall in the WHL final.

Oil Kings goaltender Laurent Brossoit was named the Western Hockey League's playoff MVP for his brilliant performance throughout Edmonton's march to the championship. Brossoit went 16-4 during post season play, with a stellar 2.04 GAA and a very impressive .933 SV %.

The Oil Kings will now prepare to make their way to Shawinigan, as the WHL representatives in the 2012 Memorial Cup. Edmonton joins the host Shawinigan Cataractes, London Knights and the favoured Saint John Sea Dogs at this year's championship. The Western Hockey League champs will kick off the proceedings as they facoff against the hometown Cataractes in the opening game on Friday night at 7:00 pm (ET). The tournament format runs from May 18th - 27th will all games being televised on Rogers Sportsnet.