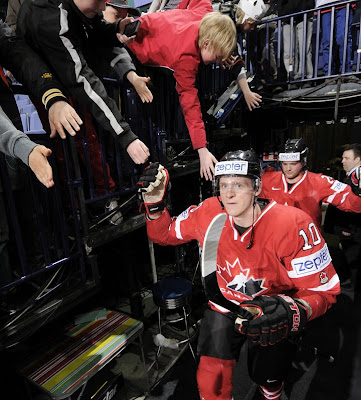 It didn't take Canada long to find the score sheet as Ryan O'Reilly beat netminder Dmitri Milchakov 2:16 in, after taking a nifty feed from Andrew Ladd and beating Milchakov on the glove side. Defenceman Duncan Keith picked up yet another assist on the goal, making him the first Canadian player to hi the double digit mark for point totals.

Belarus would tie things up late in the period, when the Kostitsyn brothers teamed up to get a puck past starter CamWard. Andrei Kostitsyn outworked O'Reilly deep in the Team Canada zone and found Yevgeni Kovyrshin with a quick pass after gaining possession in along the end boards. Kovyrshin immediately found a hard charging Sergei Kostitsyn, who wasted little time, beating Ward with a perfectly placed shot under the cross bar.

The game would remain tied until just past the nine minute mark of period two, when Ryan Getzlaf's point shot deflected in off Corey Perry leg and past the Belarus goaltender to make it 2-1. The goal came on the backend of a lengthy two man advantage for Canada, which was about to become a regular occurrence for  the remainder of the middle frame.

Getzlaf would make it a 3-1 game after poking a loose puck into a wide open net at the 12:46 mark and less then a minute later, Andrei Kostitsyn would be assessed five minute major and a game misconduct for sending Evander Kane face first into the boards.

Ryan Nugent-Hopkins would make it a three goal lead, when he poked in his fourth of the tournament with Canada on the power play to make it 4-1. Belarus defenceman Nikolai Stasenko took a shot at RNH after the goal, that the youngster responded to with a hack of his own sparking a minor melee between the two sides.

O'Reilly would close out the scoring in the final frame, potting his second of the night to make it a 5-1 final. Late in the game, Team Canada defencemen Luke Schenn and Marc Methot were both assessed boarding majors and game misconducts, that could result in one or both not being made available for Brent Sutter and his staff for Thursday's quarterfinal game. While Schenn has predominantly been used in a depth role for much of the tournament, Methot does play a major role on the backend. The Columbus blueliner has typically been paired with Dion Phaneuf at even strength while being a central figure on Canada's penalty kill.
Posted by Oil Drop at 7:14:00 am