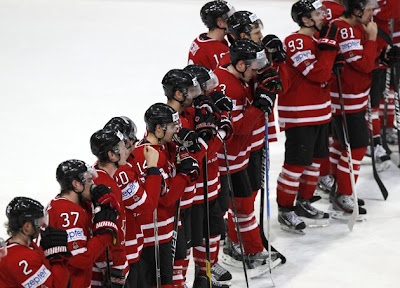 In all fairness, watching Canada fall to Slovakia was somewhat surprising but it was not a major upset. This is a tournament that typically is missing many of the world's best players because of the NHL playoffs and players wanting to start their off season, instead of continuing to play after what would have been a grueling and disappointing season.

Heading into the championships, Canada looked to have a legitimate shot at possibly winning a gold medal but that all changed with the upsets that took place during this year's National Hockey League post season. While Canada was lucky enough to add the likes of Duncan Keith and Patrick Sharp to their roster, players such as Evgeni Malkin, Henrik Zetterberg, Pavel Datsyuk, Zdeno Chara and Alex Ovechkin were also added to their respective countries roster. With that being the case, all that should have been expected was for the Canadians to get to the semi-final round. Unfortunately, they fell a little short but again, it should not come as a total surprise.

Outside of the early struggles of Ryan Getzlaf and Corey Perry, the forward group did their job throughout the tournament. They scored at least three goals in every game and gave themselves a chance to win every time out. All four of their lines contributed on an almost nightly basis and every forward on the roster scored at least one goal. Overall, the production was there from the forward group.

When a group of players are thrown together for a tournament like the World Hockey Championships, the one area that is usually a concern, are special teams. Canada's power play was alright but should have been a better, considering they had duos in place like Keith-Sharp, Getzlaf-Perry  and Jordan Eberle with Ryan Nugent Hopkins, that play with one another on the power play with their NHL clubs. The biggest problem they had with the man advantage was their coaching staff continually going back to the Getzlaf/Perry in their top unit. In my mind, that distinction should have gone to Nugent-Hopkins, Eberle, John Tavares, Keith and Sharp. One could argue that Nugent-Hopkins is already one of the premier power play guys in the entire league, which made his inclusion on the second unit as rather perplexing move. Five-on-five RNH could have been limited, if necessary, but not using him to his full potential on the power play was a mistake.  Giving the veterans that extra bit of rope did hurt this club in the long run but that can't be changed now.

As far as the penalty kill goes, it directly ties into Canada's lack of depth on the blueline and average goaltending. Cam Ward was no better then average in any of his starts and made maybe two timely saves throughout the tournament. To make matters worse, he allowed early goals in almost every start and let a few stinkers sneak by him to boot. Add to that Devan Dubnyk looking a little shaky in his two starts against inferior teams and it was obvious that Ward would be there guy and he simply wasn't good enough.

On the backend, this club was dealt a major blow when P.K. Subban was injured in a  pre-tournament exhibition but could you imagine what this D would have looked like if Keith wasn't included as  late addition? Nothing against Dion Phaneuf  or Jay Bouwmeester but those two have proven time and again that they can not be counted on to be go to guys. Phaneuf looked good against the lesser teams during round robin play but had his issues in every game against the better teams in Group H. As far as Bouwmeester goes, he is what he is. You never really notice him  on the ice because he is not a difference maker. If there has been a player that has underwhelmed more then Jay over the past fifteen years, with his type of skill set, I am not sure who it is.The fact that this team missed Marc Methot as much as they did in the quarterfinals against Slovakia, says all you need to know about their blueline.

In the end, Canada put together a good young team for the 2012 World Hockey Championships but it was nowhere near good enough to compete with the big boys at crunch time. They were good but they were not any better then that, especially when the majority of the countries best available players decided to skip out on a tournament that holds little, if any, prestige in the eyes of players from North America.
Posted by Oil Drop at 3:35:00 pm