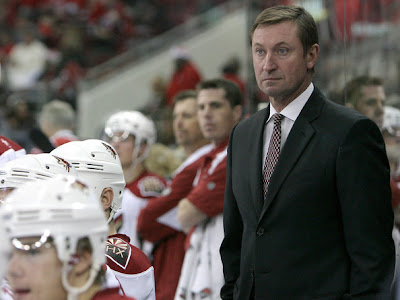 This franchise needs a coach who would be willing to loosen the reigns a little and let these kids see what they can do with a little more rope. Ironically, the man Tippett replaced in Phoenix is a guy that fits that description to a tee. That man being non other then the Great One, Wayne Gretzky.

Now before you simply dismiss Gretzky as a legitimate candidate because of his less then stellar record as the Coyotes head coach or because you don't want to see this organization go back to the "old boys club", lets give this some actual thought. While he may not be the greatest x's and o's candidate out there, he just might be the one that brings the intangibles that are so badly needed in this situation.

His 143-161-24 coaching mark with an inexperienced and under skilled Phoenix side was nothing to right home about. Having said that, that team played a far more entertaining brand of hockey with him behind the bench then they have since Tippett took over. Granted, it is a results driven business and the Coyotes have never been more successful then the present day but every situation is different.

Gretzky is a guy that clearly showed he wanted to coach the game a certain way but didn't have the horses to do so. That would not be the case in Edmonton, as he would have a roster that features some of the best young talent in the game, that are just waiting to be given the opportunity to show what they could do with a little wiggle room.

In my mind, your head coach does not need to be a brilliant tactician but he must be someone who commands respect from his players, while being able to motivate them to want to be the best they can be. While it was a different  time back in the 80's as opposed to now but Glen Sather was not this coaching genius during the Oilers dynasty. He had an outstanding assistant in John Muckler and another pretty good guy in Ted Green, that never received the recognition he deserved, that allowed him to be the type of coach he was.

Make no mistake, Sather was the guy who determined the style they played and was the man who would push all the buttons to get his guys going. While Muckler and Green played huge roles in their system play and that would be exactly the type of setup Gretzky would flourish in. Coaching staffs throughout the sporting world are littered with guys who typically can't stay out of their on way and usually finish up with less then desired results or ruining the game as a whole. Any successful staff, has to be put together with the right people in the proper roles and for whatever reason, that was something Gretzky never had in Phoenix.

Edmonton has built a team around their young talented forward group and bringing in a a coach that would stifle their growth as player to win games, is something that can't happen. Ultimately you play the game to win but if this team can only accomplish that by playing the God awful hockey that the majority of teams played in this year's playoffs after round one, count me out.

This Oilers have thoroughbreds in Taylor Hall, Ryan Nugent-Hopkins and Jordan Eberle that are on the verge of hitting their stride as NHL players and they need to be used in such a manner that allows them to take that nest step in their development. Is there still more growing pains to come? You bet but it is the next logical step for them to take in the progression as players.

In my mind, there is no doubt that Gretzky would ride these guys and let the chips fall where they may. He would not be one to pull the Dale Hunter/Alex Ovechkin routine, that we all saw in Washington during the postseason. The Oilers need a head coach that won't play it safe and that is my fear with Brent Sutter being brought into town.

Canada's elimination at the hands of Slovakia, at the World Hockey Championships, is a perfect example. After playing a dreadful opening period, Team Canada came out and dominated the middle frame and had the lead heading into the third. You would think that the Canadians would continue playing the same way, as the Slovaks showed no signs of being able to slow them down. Instead, they came out missing the energy they showed in period two and reverted back into a safe game, to try and nurse their one goal lead to victory. Playing that way left the game in the balance and couple of unfortunate bounces later, Canada found eliminated from the tournament. Was it all on Sutter? No but you need to know your audience as a coach, which is something Gretzky learned the hard way in Phoenix.

It is a essential for thE Edmonton Oilers to bring in a head coach who has the gonads to have this team play the brand of hockey that they were built to play. Anything short of that' would be an epic failure. The long term goal for this franchise is to become a perennial favourite for the Stanley Cup. While that is still a few years away, they need to come to grips with what type of team they exactly are and bring in a coaching staff that best suits their needs. This organization does not need a hire a head coach that is looking to reinvent the wheel, they simply need to bring in someone who fits with what they are trying to accomplish and Wayne Gretzky might just be that guy.
Posted by Oil Drop at 7:36:00 am