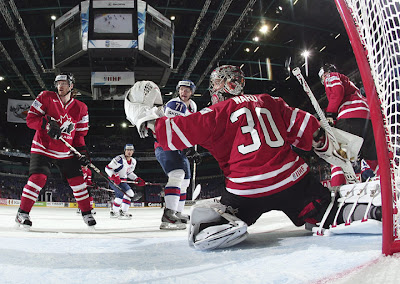 Things did not get off to the start Canada had hoped for, as Slovakia picked up the level of their play from t he preliminary round and Canada was unable to match that intensity. They were second to every loose puck and were gliding into plays, whereas the Slovaks were banging bodies from the outset and they would be rewarded for their hard work.with an early lead.

As has been the case in many of Team Canada's games, they fell behind early when Florida Panthers winger Tomas Kopecky opened the scoring 5:57 in. Kopecky drove hard to the Team Canada net and had former Philadelphia Flyer Branko Radivojevic's shot deflect off him and past Cam Ward. Just like that, Canada was trailing and less then four minutes later, it would become a two goal deficit.

Maroslav Satan cruised into the Canada end, picked up a loose puck and quickly snapped a shot past a stunned Ward to make it 2-0. Slovakia could smell the upset and Canada was looking tight. While the Canadians had the puck for much of the period, they accomplished little with it and continued to turn the puck over in the Slovak end.

Late in the frame, Canada would get that all important first goal and cut the lead in half. Edmonton Oilers winger Jordan Eberle made a simple dump in at the Slovakia blueline, that Ryan Getzlaf and Evander Kane would win possession of along the end boards. Seconds later, Getzlaf would drive to the net and Kane would slip the rebound past goaltender Jan Laco.

After surviving the opening frame, Canada came out of the dressing room like a completely different team. Right from the drop of the puck, they were pressuring Slovakia all over the ice and crashing Laco's crease every time down the ice. Suddenly the ice was tilted and there was seemingly nothing Slovakia could do to stop them.

With Canada on a power play, Dion Phaneuf sprung Eberele on a partial breakaway from the blueline in but the Oiler sniper was stoned by the Slovak puck stopper with a nice blocker stop. To Eberle's credit, he quickly recovered the puck behind the goal and found Jeff Skinner with a nifty feed, that the Carolina Hurricanes youngster buried to even things up at two.

The Canadian domination continued throughout the period and with just over two minutes remaining in the middle stanza, they would take their first lead of the game. Alex Burrows would poke home a loose puck across the goal lone to give Canada the lead heading into the intermission. Defenceman Kris Russell made the entire play, by simply getting the puck to the Slovakia net with all sorts of traffic in front of Laco and seconds later, the Vancouver winger was celebrating the go ahead marker.

Neither side created much of anything during the much of the third, as it seemed as though Canada decided to play a defensive game in the final frame. It was a decision that would prove costly, as Slovakia would tie things up with just under seven minutes remaining.With Canada in complete control of the play behind the Slovakia goal, Evander Kane made a brutal pass out front to absolutely no one and Slovaks would turn it up ice on an odd man rush. Milan Bartovic's initial shot on goal was blocked by Getzlaf, which left Ward out of position to deal with Bartovic's next attempt. Suddenly, this game was up for grabs.

After evening thing up, Slovakia could taste the upset and kept pouring it on. Satan was setup for a wide open look moments after Bartovic's equalizer but the former Buffalo Sabre hit the crossbar, after Phaneuf turned over the puck behind the Team Canada goal.

After killing off a Ryan Nugent-Hopkins boarding penalty, Canada was looking to rebound and try to secure the winner. Unfortunately, captain Ryan Getzlaf was assessed a five minute kneeing major after colliding with forward Juraj Mikus and Canada would pay dearly.

It took Slovakia all of four seconds to regain the lead, as Michal Handzus tipped home Andrej Sekera's point shot to make 4-3. To make matters worse, with Getzlaf being given a major, Canada remained shorthanded and amounted nothing resembling a scoring opportunity over the final two and a half minutes.