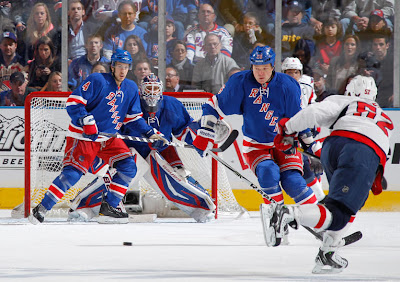 Think back to the start of this year's playoffs and did you hear anyone complaining about blocked shots or low scoring games? If anything it was the complete opposite. How many fans and media alike were referring to the opening round as "one of the best we have seen"? How about the Pittsburgh Penguins vs Philadelphia Flyers matchup. Did anyone not enjoy that? There were blocked shots in that series but there was a whole lot of other stuff to focus on. It was arguably the best first round series in decades. Fast forward a few short weeks later and everyone is talking about what a drag the playoffs have become. My question isn't how this has happened but rather, how this a surprise to anyone?

The vast majority of people love seeing the upset in sport and find themselves cheering for the underdog. It's just natural for most to support the lesser skilled but hard working team, unless of course, your team is one of the favourites. If it doesn't effect you in anyway, who doesn't like to see that little engine that could come out on top? That being case, this year's post season has delivered an absurd amount of large and somewhat small upsets, which in turn, eliminated many of the more exciting teams early in the post season.

Go back and look into the history of the game, you will almost always find offensive thinking minded teams and defensive minded sides in any era. Unfortunately for hockey fans, all those "wonderful" first round series have deprived fans of having an entertaining product to watch the rest of the way.

Simply look at the teams that were eliminated in round one:

Now with Philadelphia playing the Penguins and Los Angeles facing the Canucks in round one, we new two of the more entertaining teams to watch were going to be knocked out regardless of what happened in the other series. However, when you factor in the likes of the Bruins, Sharks, Red Wings and Blackhawks all being bumped, what were you honestly expecting from here on out? Once the first round ended, I told anyone who would listen, that the playoffs would now become almost unwatchable. Outside of Philly and the Kings and Rangers, to a lesser degree, what was left? Nothing against the Blues, Coyotes, Devils, Predators and a completely re-worked Washington Capitals side, there was nothing worth watching. Some coaches have to coach a certain way because of how their teams are built while others coach a certain style, regardless of their teams skill level. Honestly, of that group New Jersey is by far and away the most exciting and once you get past their top line, it isn't that pretty. Not surprisingly, the potential of playoff excitement went out the door with all those teams that try and play a skill game.

As far as the on ice officiating goes, they have simply put their whistles away...and did so long ago. Arguably over the last thirty games of the season, any game you would watch would leave you scratching your head as to what was or wasn't a penalty. Covering the Oilers throughout the season, it was clear that teams could take runs, hack, clutch and grab at Jordan Eberle, Ryan Nugent-Hopkins and Taylor Hall without any fear of repercussion. If they decided to question the referee about a non-call or even look there way, it would only get worse. It wasn't something that was exclusive to Edmonton, as it happened in almost every game I watched down the stretch and continued right into the playoffs. Did the league learn nothing from the past? Apparently not.

If lesser skilled  teams have to revert to tactics in order to stay in games, then those infractions need to be called...all the time. I have lost count of how many chintzy stick infractions have been called throughout the post season and yet a blind eye is turned time and time again, to legit on ice fouls. Do they really need to make that hooking or interference call when a guy barely touches someone with their stick? Yet ignore players that being drilled into the boards or mauled in the corner or in front of the oppositions net? Is that what this league has gone back to? If that is the case, then they are right on target, Unfortunately for the National Hockey League, the game is once again becoming unwatchable.

Players are not dumb. They know what they can and can't getaway with but if they believe the can push that envelope a little more, then they will do it. It is up to officials to ensure the right calls are being made on the ice or you get what we currently have. If you have to put a team a man down ten times in a playoff game, then you do it. Then we will see how many shots are blocked. You can only drop in front of so many before you simply can't take it anymore or get injured. Sure there will always be exceptions to the rule, running into a hot goalie or a team that is cold on the power play but more often then not, the better team will win. If the league would pay half the amount of attention to the overall level of officiating, rather then just the calls that are missed on head shots, the game would be far more entertaining to watch on a nightly basis.

While teams like the New York Rangers and Washington Capitals have taken to blocking shots as some sort of team mantra, it is nothing new. It's the rite of spring for NHL players. In order to get to the Stanley Cup Finals every team needs to sacrifice but because these playoffs have been such a drag to watch from the second round on, the spotlight has been placed on the wrong area. Legislating in rules to not allow teams to block shots as easily as the currently do, isn't the way to go. Simply officiate the game the way it should be and the rest will take care of itself...at least the majority of time.
Posted by Oil Drop at 10:45:00 am