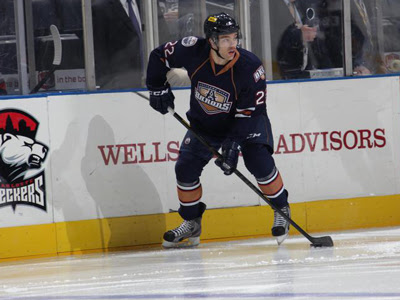 With the core of the Edmonton Oilers NHL roster starting to click on a regular basis down in OKC, the Barons are quickly becoming the talk of the American Hockey League. A third consecutive three point night from Taylor Hall, another two goal effort from Jordan Eberle and three more points from defenceman Justin Schultz, was more than enough on Sunday afternoon.

The 7-2 pounding of the first place Charlotte Checkers not only completed a weekend sweep for the Barons but helped stretch their current win streak to five straight. Having gone 6-0-1 over their last seven, Oklahoma suddenly finds themselves just two points back of the Checkers for top spot in the South Division, with a game in hand.

While the quartet of Oilers youngsters have been carrying the mail for much of the season, it was the club's second line of Anton Lander, Magnus Paajarvi and Teemu Hartikainen that would bookmark the big boys contribution in this one. Lander scored his first of the season to get things started early in the first and Hartikainen would add his sixth on the year, to close out the scoring.

A shorthanded marker from Chris VandeVelde and the tenth of the year by Eberle, gave OKC a two goal cushion after twenty minutes of play. Charlotte's Zach Boychuk would cut the lead to one with a power play goal early in period two but it would be all Oklahoma City from that point on.

Just over three minutes later, Eberle would bring the Charlotte netminder's night to an early end. After taking a pass in the neutral zone, the Oilers leading scorer drove hard to the net, before chipping a shot through Ellis. That was it for the former Nashville Predators starter, who had surrendered six goals on twenty-nine shots.

With his third straight three point night, Hall has vaulted up OKC's scoring leaders with fifteen points in ten games played. He sits one point back of Paajarvi for fourth spot and just five points back of Ryan Nugent-Hopkins.

Schultz and Eberle continue to not only lead the way for the Barons but also the entire AHL. The first year defenceman leads all scorers with twenty-eight points but his teammate is hot on his trail. Eberle has not only inched within two points of the scoring lead but also finds himself trailing only Boychuk (12) and Syracuse Crunch centre Tyler Johnson(13), for the American Hockey League goal scoring lead.

With the weekend sweep now complete, the Barons will now head to Houston for pair of games against the Aeros on Thursday and Friday night. Though Oklahoma City has gone a perfect 3-0 on their current seven game road trip and are playing their best hockey of the season, Houston has given them all sorts of trouble in their three previous battles, winning two of those three games.
Posted by Oil Drop at 8:56:00 pm