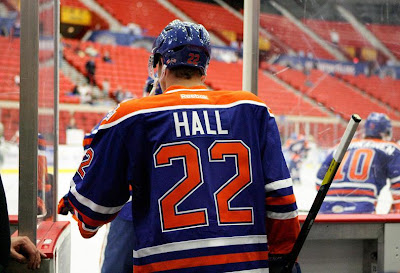 For the most part, things have been going according to plan for the Edmonton Oilers organization of late. The Oklahoma City Barons are starting to hit their stride and make their way up the American Hockey League standings and their most recent stretch has been fueled by the Oilers young quartet, with Taylor Hall leading the way..

Not surprisingly, the Barons started playing their best hockey of the season, after the arrival of the former first overall selection. Hall has suited up for ten games since arriving in Oklahoma City, collecting fifteen points and helping OKC to a 7-2-1 record.

They kicked off their current seven game road trip on November 21st in Texas and Hall has been on fire ever since. The former Windsor Spitfires standout led Oklahoma to three consecutive wins, recording three point performances in all three contests.

That little run earned Mr. Hall the honour of being named the AHL's Player of the Week on Monday afternoon.. The twenty-one year old joins defencmean Justin Schultz, who had the same honour bestowed upon him earlier in the season, as the Barons two latest winners of the league's weekly award.

While the Oilers youngsters continue to build on what is turning into a rather scary looking chemistry between Schultz and the trio of Hall, Jordan Eberle and Ryan Nugent-Hopkins, the news over in Sweden wasn't nearly so positive.

For the second consecutive year, highly touted prospect Oscar Klefbom has been knocked out of action due to injury. The talented Swede had missed time during the 2011-2012 campaign, due to a laceration to his thigh and a concussion but this time around, it appears to be far more severe. Apparently, the big blueliner fell awkwardly onto his shoulder and will be needing season-ending surgery to repair the damage.

Not exactly what the Oilers or the nineteen year-old defenceman had in mind from a developmental standpoint but those are the cards they have been dealt. Klefbom, who is currently being checked out by the organization's medical staff in Edmonton, is expected to be ready for the Oilers 2013 training camp.

The club is expected to announce a timetable for the former first round pick's surgery, sometime over the next couple of days. Definitely a tough break for Klefbom, who had manged to win atop four role with Farjestads BK Karlstad in the Swedish Elite League.
Posted by Oil Drop at 1:51:00 pm