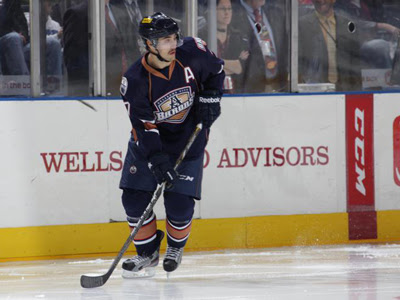 Another three point night from Taylor Hall and two more goals from the red-hot Jordan Eberle, paced the Oklahoma City Barons to a huge 4-2 win over the Charlotte Checkers. While the Edmonton Oilers dynamic duo led the charge upfront, Ryan Nugent-Hopkins and Justin Schultz still managed to lend a helping hand in the victory.

Nugent-Hopkins completed the Barons latest third period comeback, scoring the winner midway through the final frame, while Schultz picked up two more points, as he continues to lead the American Hockey League in scoring. The come from behind win moves Oklahoma to within four points of the South Division leading Checkers and leaves them sitting in fourth spot in the AHL's Western Conference.

Charlotte could not have asked for a better opening forty minutes of play, as they took a 2-1 lead into the final intermission. Two second period goals had out them in front and to that point, they had limited the Barons top line to a single goal. However, that would all change in period three.

Having already scored his first of the night, courtesy of some hard work from Hall and a nifty little feed from Justin Schultz, Jordan Eberle decided to go solo early in the third. The Oilers star winger took a feed from Hall at the Charlotte blueline and quickly undressed Zac Dalpe, before freezing Justin Peters with a slick little move, to tie things at two. It was another lovely and big goal from the Mr.Clutch but one Oilers fans have come to expect from the talented twenty-two year old.

The South Division leading Checkers were handed a glorious opportunity, just over a minute later, as back-to-back OKC penalties put them on their second two man advantage of the night. Unfortunately for them, they would come away empty handed on both occasions.

That penalty kill coupled with Eberle's highlight reel marker shifted the momentum to the visitors bench and minutes later, they would take their first lead
.
Hall continued to play the role of playmaker, finding Nugent-Hopkins with a perfect pass from behind the Checkers net, that the Nuge wasted little time firing home. That made it back-to-back three point night's for Hall, giving the Oilers future captain 12 points in his first nine games since returning from off-season shoulder surgery.

Oklahoma City's top line paired with Schultz and Martin Marincin, were simply too much for Charlotte to handle. The five man unit combined for nine of OKC's ten points on the night, the lone exception being Colten Teubert's unassisted empty netter.

The win stretches the Barons current win streak to four and gives them a 5-0-1 mark over their last six games. While they are in the midst of a seven game road trip, they are playing their best hockey of the season and seem to be clicking in all cylinders.


They will be looking for the weekend sweep of their South Division rival on Sunday afternoon, as the two sides will face-off for the second time in under twenty-four hours. With the Barons currently owning three of the American Hockey League's top four scorers and Taylor Hall collecting points at will, it could be a very long afternoon for the hometown Checkers.