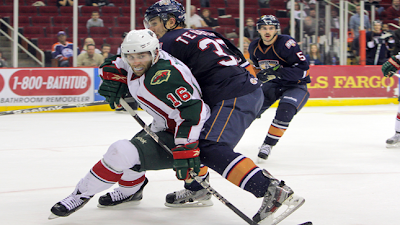 After running off five straight victories, the Oklahoma City Barons have dropped their second in as many nights to the Houston Aeros, this time by a score of 4-3. The win marks the fourth time in five games, that the Barons have fallen to the Aeros this year, as they continue to ride the Minnesota Wild jinx over all things related to the Edmonton Oilers.

Taylor Hall and defenceman Justin Schultz had two points a piece in the losing effort and Jordan Eberle notched his team leading twelfth of the year, as OKC fell to 3-1-1 on their current seven game road trip. Netminder Olivier Roy made his first start in nearly four weeks, stopping twenty-three of twenty-seven shots, fired his way.

As has been the case on far too many occasions this season, Oklahoma found themselves trailing inside the opening ten minutes of play, courtesy of Justin Fontaine. The goal came seconds after OKC had killed off a Hall cross-checking minor,  after watching Houston's David McIntyre taking liberties with Ryan Nugent-Hopkins.

Less than two minutes later, Teemu Hartikainen caught Jarod Palmer with a huge open-ice hit, which McIntyre had little use for. Not surprisingly, the gloves were off and after it was all said and done, the Barons found themselves on the power play.

Unfortunately for the Aeros, just as the penalty was about to expire...Eberle would fire home his third power play marker of the year. The see-saw affair would continue, with the Barons back on the man advantage but this time it would be Houston  who would connect for a shortie

Seconds after watching Jason Zucker put a quick shot behind Roy, the visitors would strike back on the same power play, as Mark Arcobello sailed a shot from the side boards, that goaltender Matt Hackett would like back. That made it two power play goals for and one shorthanded against...all inside the opening fifteen minutes of action.

Give Houston credit, after taking last night's opener in a shootout and blowing two first period leads in this one, they simply came out and took over the second period. They continued peppering Roy and were finally rewarded with a power play goal of their own, as Johan Larsson buried a loose puck from the edge of the crease, to re-store their one goal cushion.

After being by-standards for much of the middle stanza. Oklahoma came out on fire in the third but just like the previous night, they were unable to get that all important next one behind Mr.Hackett. An absolute awful giveaway by defenceman Jordan Henry, would see Zucker handed his second of the night, with exactly seven minutes to play.

Twenty-two seconds later, Hall would get the lead back down to one, thanks to a perfect outlet pass from Schultz and a brilliant individual effort from the former Windsor Spitfire standout. The two point effort pushed Hall into a tie for fourth spot in team scoring with Hartikainen, despite playing just twelve games since making his AHL debut on November 2nd.

With his sixteen points, Hall trails RNH by just four points, as he continues to make his climb up the American Hockey League scoring leaders. As for Schultz, he became the first player to break the thirty point barrier on the season and now holds a four point lead over Eberle, as the league's premier scorer.