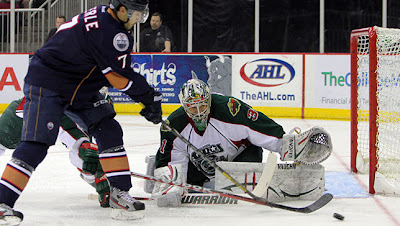 Maybe it has something to do with those Minnesota Wild styled jerseys reeking havoc with all things related to the Edmonton Oilers or perhaps it is just a case of dumb luck. Whatever the reason, the Oklahoma City Barons five game win streak came to a crashing halt on Thursday night, losing for the third time in four meetings to the Houston Aeros. The 2-1 loss marked the second time they have dropped a decision to the Aeros via the shootout.

Defenceman Justin Schultz continued his torrid run to open his professional career, scoring his eleventh goal of the season but that was all the mighty Barons offence could muster on this night. Netminder Matt Hackett not only stopped twenty-three of the twenty-four shots fired his way but manged to stop the trio of Jordan Eberle, Ryan Nugent-Hopkins and Taylor Hall in the shootout.

Houston would draw first blood, after Nick Palmieri blew past Schultz and went roof on Yann Danis with a gorgeous backhand, to make it 1-0 at the 5:01 mark. Not exactly the start the young blueliner or the Barons were looking for but OKC would get back on level terms, courtesy of Mr.Schultz.

The talented rearguard made it look almost too easy, as he stick-handled his way into the slot, before zipping a perfectly placed wrister behind Hackett, to even things at one. It was typical Justin Schultz, as the kid continues to almost make a mockery of the AHL. The even strength marker gives the former second round pick of the Anaheim Ducks, twenty-nine points in his first nineteen games, as he continues to lead all American Hockey League scorers.

There would be no more scoring over the final 54 minutes of play, as the Aeros carried much of the play but thanks to some timely stops from Danis during regulation and overtime, the two sides were headed to a shootout for the second time this season.

Schultz would get the Barons off to a great start, beating Hackett with a quick snapshot but Houston's Jason Zucker would respond, leaving things even after one shooter. Which is when the Aeros puck-stopper, decided to take it up a notch.

He stopped Eberle with a lovely pad save, on the snipers trademark move, watched RNH fire his attempt wide and stoned Hall with another pad stop, sending the sparse crowd into a minor frenzy. At the other end of the rink,  Zack Phillips would follow Zucker's goal with one of his own but Danis would deny the next two shooters. leaving it up to Toni Rajala to extend things further. The silky Finn did not disappoint, making a nifty little move, before beating Hackett.

Danis stopped Palmieri, to force another round of shooters but Teemu Hartikainen could not keep it going. After watching his netminder foil Hartikainen's attempt, Kris Foucault would make no mistake, sliding home the winner and handing the Aeros the extra point.

The loss was Oklahoma City's first on their current seven game road swing but the loser point did push their streak to eight straight games, in which they have collected at least one point. That 6-0-1-1 stretch has vaulted the Barons up the standings, to within one point of the division leading Charlotte Checkers.

These two won't have to wait long to renew acquaintances, as they will face-off for the second straight night on Friday evening. While Danis has received the last nine starting assignments from head coach Todd Nelson, at some point, you would think he would towards getting Olivier Roy a start.

However, with the Barons not scheduled to play again until December 8th, do not be surprised if the veteran netminder is back in between the pipes for OKC, despite his less than impressive 1-1-0-2 mark against the Aeros on the season.
Posted by Oil Drop at 9:53:00 am