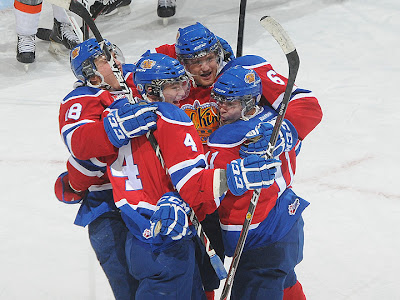 On a night in which the Edmonton Oil Kings should have a had an easy time of things, it was the play of former Oil Kings netminder Cam Lanigan, that made things far closer than they should have been. A late overtime marker by Keegan Lowe spoiled Lanigan's forty-five save performance, lifting Edmonton to a crucial 2-1 victory over the visiting Medicine Hat Tigers.

In what was a rather feisty opening twenty minutes of action, which included a spirited tilt between Tigers defenceman Tyler Lewington and the Oil Kings Stephane Legault, Edmonton fired pucks at will on the Medicine Hat puckstopper but were unable to find the mark.

They finally managed to get one behind Lanigan in the second period. courtesy of the red-hot Henrik Samuelsson and some nice work from Curtis Lazar. While the even strength marker pushed Samuelsson's personal point streak to six games, it was the flashes of brilliance shown by Lazar, that was a welcome change of pace.

Though the talented seventeen year old has still managed to collect seventeen points over Edmonton's first twenty-five games of the season, he would be the first to admit to his struggles. However, with points in three consecutive games, since being re-united with Legault and Samuelsson earlier in the week, the projected early first rounder appears to be on the verge of turning the corner.

Edmonton would hold that lead until late in the third period, when it finally happened...the Oil Kings gave up a power play goal. It had been ten games and forty-three consecutive kills since the Western Hockey League's top penalty killers had last surrendered a goal but Dylan Bredo quick shot found it's way past Tristan Jarry, to even things at one.

That seemed to ignite the home side, as they dominated the final six minutes of play, pinning Medicine Hat for long stretches in their end.  Lanigan continued turning aside all comers, though he had a little help from his goal posts. The extra session had not been kind to the Oil Kings during the 2012-2013 campaign, as the defending WHL champions had gone 0-2-2 in their previous four overtimes.

They continued swarming Medicine Hat through much of OT but the former Oil Kings netminder looked poised to get this one into a shootout...until Lowe decided to play the role of hero. After being robbed on point blank shot only second earlier and having hit the iron late in regulation, the Carolina Hurricanes prospect pinched in deep and buried the winner with one second left on the clock. It was an absolutely gorgeous feed from Michael St. Croix, leaving Lanigan absolutely no chance on the play.

After dropping the opener of their four game home stand to the Prince Albert Raiders in overtime, Edmonton rebounded nicely, reeling off three consecutive wins to close it out and improve to 16-5-2-2 on the year. They currently sit a single point back of the Calgary Hitmen for first place in the division, with a home-and-home set with the Kootenay Ice next on the docket.
Posted by Oil Drop at 11:32:00 am