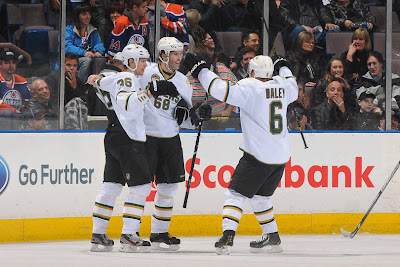 On a night in which the Edmonton Oilers played much of the game with one legitimate NHL centre in Sam Gagner, it is hard to be overly disappointed with their 3-2 overtime loss at the hands of Jaromir Jagr and the Dallas Stars.

Despite some yeoman's work from the likes of Ryan Smyth and Taylor Hall in the face-off circle and outstanding performances from both Hall and Ales Hemsky, it was not enough to keep the young Oilers from dropping their fourth in a row.

With the trio of Ryan Nugent-Hopkins, Shawn Horcoff and Eric Belanger already missing from their lineup, it did not take long for Ralph Krueger's suddenly injury-riddled side to send another centre to the infirmary. Anton Lander was forced to leave the game after taking a shot off his foot during his first shift, leaving Edmonton with Gagner and recent AHL call-up Mark Arcobello as the club's only two centres.

While Jagr put this one to bed early in overtime, after undressing defenceman Ryan Whitney in the corner and firing a laser past Devan Dubnyk on the shortside, one which the Oilers tender would surely love back. All things considered,  the severely undermanned Oil did well in earning themselves a single point on the night.

After Hemsky gave them a 1-0 lead early in the second period, in which Gagner extended his point streak to ten straight with yet another assist, the Stars took over during what was a very sloppy opening forty minutes of action.

Jamie Benn did what he always does against the Oilers, potting his third of year at the 13:24 mark, putting the visitors back on level terms. With Edmonton already on their heels, Dallas took full advantage of  a phantom hooking call on Hemsky and a blown offside on the ensuing man advantage, to take their first lead of the night.

Derek Roy hammered home his first of the year, beating Dubnyk with a long point shot, giving the Stars a 2-1 lead heading into the second intermission. After carrying his team through much of the opening ten games of the season, the Oilers starting netminder's play has started to come back down to earth, allowing four iffy goals in his last two outings.

Give Edmonton credit, they came out hungry in the final frame and were all over the Stars in the final twenty minutes, led by an all out assault from #4. While Hall was buzzing for much of the night, he took his game to another level in the third, attacking the Dallas zone every time he touched the puck. In all honesty, it seemed as though the kid never left the ice over the final ten minutes of play.

The Oilers would get their equalizer on the power play, courtesy of a Justin Schultz blast, which was beautifully teed up on a lovely feed from Hemsky and started off with a perfect cross-ice pass from Hall to #83. Just like that, Rexall Place was jumping once more but it would not last.

Dubnyk made an absolutely crucial stop in final two minutes, stoning Loui Eriksson on the doorstep, to get this one to OT but in the end, the night would belong to Jagr. As the forty year old future Hall of Famer did what he has done throughout his NHL career, scoring the big goal when his team needed it most.

With the loss, Edmonton fall to 4-3-3 on the season but remain second in Northwest Division and currently sit seventh in the Western Conference with eleven points.
Posted by Oil Drop at 8:41:00 am