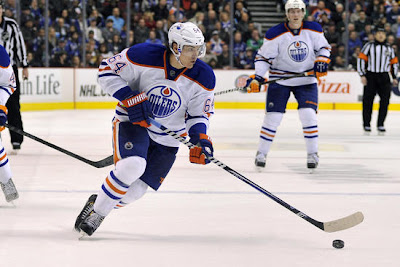 While it is nice to see Ralph Krueger and his coaching staff willing to mix things up, in hopes of shaking his Edmonton Oilers out of their season long struggles of producing at even strength. The idea of possibly moving rookie Nail Yakupov away from the rest of the core group of talented youngsters, is a rather perplexing one.

Now the thought of having the talented Russian seeing time on his preferred right side is a very intriguing one, the idea of having him playing alongside the likes of Eric Belanger, Chris VandeVelde and even Magnus Paajarvi, is not so enticing.

The talented Swede has loads of talent but he has yet to find his legs at the NHL level. With that being the case, the possibility of dropping Yakupov onto a line with Paajarvi and a checking line centre, seems an experiment that is destined to fail.

Now the trio of Yakupov, Sam Gagner and Ales Hemsky have definitely had their challenges at five-on-five, they have still manged to produce some offence at even strength. That being said, they have done much of their damage on the man advantage. Perhaps making a slight change to the look of the top six, something yours truly had suggested two weeks ago, wouldn't be such a bad idea.

If part of the plan is to see how the 2012 first overall selection looks on the right side, the solution does not need to revolve around him playing with lesser talent. Instead, having Yakupov take a twirl on a line with Taylor Hall and one of Ryan Nugent-Hopkins or Sam Gagner, would seem to be the most obvious choice.

The simplest of swaps would be flipping Hall and Ales Hemsky and see how things go but it appears as though Krueger is leaning towards using Teemu Hartikainen with Nugent-Hopkins and Jordan Eberle. Definitely changes the complexion of the top two lines but not necessarily for the better.

While the new Oilers bench boss was talking about the Oilers having the potential of "three scoring lines", at the moment, they don't even have one. If they want some instant offence, might I suggest reuniting Hall and Hemsky, whom have generally been Edmonton's best forwards on a nightly basis, with Gagner.

Leaving Yakupov to play with the far more defensively responsible duo of Eberle and RNH. Regardless of what trio they use, both would be better options than having the former Sarina Sting standout playing with guys that think and process the game at a completely different level.

At the end of the day, it is like Oilers NOW host Bob Stauffer always says, "it's about the process, not the result"...though those days are nearly at an end.
Posted by Oil Drop at 11:14:00 am