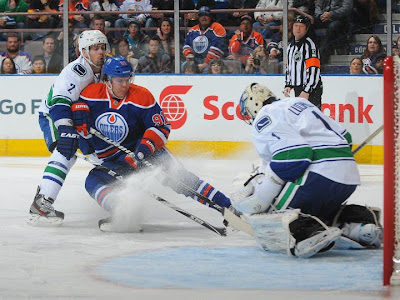 It was a night in which the Vancouver Canucks badly outplayed the Edmonton Oilers over the final forty minutes of action but it was still a game the Oilers let slip away. Defenceman Christopher Tanev picked a helluva time to score his first career NHL goal, beating Devan Dubnyk in the dying seconds of overtime and leading the Canucks to a come from behind 2-1 victory over their Northwest Division rivals.

Edmonton received more bad news n the injury front, as blueliner Mark Fistric left early in the first with a bad back, after narrowly missing Jordan Schroeder with a huge hit. While Fistric is likely looking at a day-to-day timeline for his return to the lineup, the news was far worse for Shawn Horcoff, who was returning from a two game absence with a strained neck.

The Oilers captain continued his stretch of bad luck, as a Canucks point shot nailed Horcoff's hand, breaking the veteran's knuckle. According to head coach Ralph Krueger's comments during his post-game scrum, Edmonton could be without their third line centre for some time.

Despite falling apart over the final two periods of play, the Oilers were the better team in the opening frame and jumped out to 1-0 lead, courtesy of Ales Hemsky. The talented Czech corralled a failed dump-in attempt from Nail Yakupov and proceeded to make Roberto Luongo look like a pylon, before depositing his third of the season into the yawning cage.

They would make it a two goal cushion at the 8:08 mark of period two, as Ryan Smyth's partially fanned attempt on goal, bounced off Alex Edler and somehow trickled around a sliding  Luongo and into the back of the net. It was Smyth's first of the season and the Oilers first shorthanded marker of 2013.

Vancouver would get that one back before the period was out, as Jannik Hansen would bounce in his first of the year, from a terrible angle, off an out of position Dubnyk and past the Oilers starter. Despite standing on his head for much of the night, it was a goal #40 what love to have back but the lead was still intact.

While the two sides traded chances throughout the final frame, both netminders were up to the challenge, with Luongo's ridiculous blocker stop off a wide open Jordan Eberle, being the best of the bunch. Unfortunately for Edmonotn, Kevin Bieksa's harmless looking point shot found its way through an out of position Dubnyk, with under two minutes to play, as the Oilers tender awkwardly attempted to get back into position.

It was definitely a tough break for Dubnyk, who was outstanding for much of the night, but both Vancouver goals were of the soft variety. The Canucks comeback was a "reversed" carbon copy of the Oilers season opener, in which Edmonton came back from a two goal deficit to force overtime and win it in the shootout.

This one would not need a shootout to determine a winner but did feature a penalty shot in the extra session. Taylor Hall was awarded a penalty shot midway through OT but the talented forward was denied by Luongo, who continues giving the Canucks the big stop when they need it most.

Just under two minutes later, Tanev would beat Dubnyk with a perfect shot, giving Vancouver the extra point. Seconds before the goal was scored, Eberle left the zone early, looking for a lead pass from Jeff Petry but that pass never came and the Canucks made them pay for it.
Posted by Oil Drop at 10:44:00 am