Oilers will need to make room for Ryan Jones 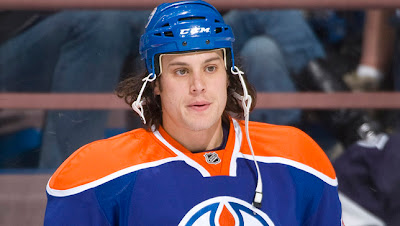 While Ryan Jones is not quite ready to make his 2013 Edmonton Oilers debut, he isn't far off. With his return likely coming sometime over the next 2-3 weeks and Ben Eager getting closer to re-joining the Oilers starting lineup, head coach Ralph Krueger will have some tough decisions moving forward.

Once everyone is healthy and ready to go, the Oilers will have seven potential bottom six wingers, to be used in four spots. The players in the mix are:

The two names that can immediately be removed from the equation, are Hordichuk and Paajarvi. The veteran tough guy is nothing more than an extra forward and will only dress when his "skill set" is deemed necessary. As for Paajarvi, Edmonton could definitely use his speed in their bottom six and are more than comfortable using the talented Swede on the penalty kill.

That being said, Magnus needs to continue to develop his game and that won't happen playing minimal minutes in Edmonton. Also, the fact he can be sent down to OKC without having to clear waivers, makes the decision that much easier.

Leaving five potential regulars, to fight for the four available slots. With that being the case, it will come down to performance and a little competition can't hurt.

At first glance, most would figure Petrell to be the odd-man out but in my mind, he is almost guaranteed to be a regular, more often than not. As long as the rugged Finn plays his game and does exactly what is asked of him, which is exactly what he does, I just can't see Krueger pulling him out of the lineup on a regular basis.

Eager is pretty much in the same boat. When Ben is engaged, no one in the Oilers bottom six brings what the former first round pick can deliver. With his combination of physicality, size and speed, if he is willing to accept his role, play smart and stay engaged...he won't be coming out of the lineup.

Leaving Hartikainen, Jones and Smyth to fight it out for the final two spots. In Hartikainen, they have a big bodied net presence, that has claimed a spot on the Oilers second unit power play. While Smyth has produced nothing offensively, he has still continued to contribute on Edmonton's penalty kill.

During his two seasons in Oilers silks, all Jones has done is produce. While at times he has lacked the jam that most expect  to see out of a bottom six forward, the former Nashville Predator has been a light's out on the penalty kill, while finding a way to put the puck in the net.

Something Edmonton's third and fourth lines have struggled mightily with the season.

In my mind, having both Jones and Smyh in the lineup is redundant, especially with the Oilers having different options at their disposal. Meaning any one of those five players vying for one of those bottom six spots, could find themselves in the press box...should they not produce.
Posted by Oil Drop at 1:31:00 pm