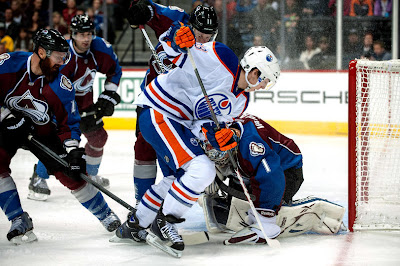 So much for ending their three game road trip on a positive note. Despite a third consecutive strong showing from netminder Devan Dubnyk and an early goal from rookie Nail Yakupov, the Edmonton Oilers were completed outclassed on Saturday afternoon.

Having run the same three game in four night schedule as the Oilers during the last week and missing arguably four of their top six forwards from their lineup, the Colorado Avalanche still managed to pull off a rather impressive 3-1 victory, over their Northwest Division rivals. Matt Duchene led the way for the Avs with a pair of assists and playing as good an all around game as you well see. The former third overall pick was a thorn in the Oilers side, playing twenty-five plus minutes on the afternoon..

Dubnyk stood tall again, stopping thirty-seven of the thirty-nine pucks fired his way, as Edmonton were badly out shot, 40- 26 to be exact. After dismantling the Avalanche 4-1 earlier in the week, the visitors looked headed for another positive result, after their young Russian sniper opened the scoring, only fifty-eight seconds in.

A burst of speed and an absolutely ridiculous feed from Ales Hemsky, left Yakupov nothing but a gaping net to deposit his team leading fifth of the year into. It was a stunning feed from #83, who was flying all afternoon long, and just the start Ralph Krueger and company were looking for.

Sam Gagner picked up an assist on the play, extending his point streak to eight straight and moving him into a tie with Taylor Hall for the team lead in scoring. Unfortunately for Hall, he would not be so lucky, as his streak came to an end at seven straight, as Edmonton's top line would be kept in check for much of the afternoon.

After gaining the early momentum one would have thought the Oilers would have found another gear, instead it was Colorado who would start imposing their will. The Avalanche peppered the Oilers net with thirteen shots during the opening frame but were unable to get one behind Dubnyk.

The Oilers continued their season long parade to the penalty box, forcing their penalty killers to try and kill off yet another two-man advantage. They managed to do just that but the Avs pressure was simply too much and Dubnyk would finally break, courtesy of a perfect deflection off the stick of PA Parenteau, mere seconds after Anton Lander's tripping minor expired.

Edmonton were handed a power play opportunity less than a minute later but it would be the Avalanche who would take advantage of another Oilers miscue. Having just held Edmonton's lethal power play at bay, Duchene would out hustle both Hemsky and Ryan Whitney, before finding a wide open Jamie McGinn, who neatly deflected a shot up and over a helpless Dubnyk.

It was a comedy of errors on the Oilers part. From Whitney initially coughing up the puck and getting caught in no man's land, to Hemsky being out muscled for the puck, to Yakupov floating back into is own zone...instead of taking McGinn out of the play. Frankly, you would be hard pressed to find an uglier sequence.

From that point on, it was all Colorado and Krueger's road weary crew simply had no answer. Edmonton were without their captain for the second straight game, as Shawn Horcoff remained sidelined with a stiff neck, and his absence was obvious.

To make matters worse, Eric Belanger was forced to leave the game on two separate occasions, after blocking a pair of shots, leaving Edmonton severely undermanned down the middle.

With a win, Edmonton could have come home with five of a possible six points, instead they finished their three game trek with a 1-1-1 record. Not a terrible trip by any means but the opportunity to make it a great one, was simply wasted away.
Posted by Oil Drop at 9:21:00 am