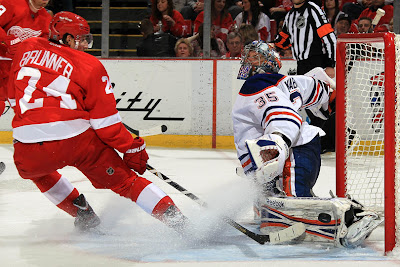 Despite a sparkling performance from netminder Nikolai Khabibulin, the Edmonton Oilers and their highly regarded power play let their veteran goaltender down on Saturday afternoon, falling 2-1 to the Detroit Red Wings, kicking off CBC's Hockey Day in Canada. Defenceman Justin Schultz continued to impress, potting his fourth of the young season, in another disappointing showing from the young Oilers.

In a game that featured a ton of power play time for both teams, producing all three goals, at the end of the day the Red Wings were one shot better than the Oilers on the man advantage. Niklas Kronwall's third period power play marker proved to be the difference, pushing Edmonton's winless skid to five straight.

After coming out and playing a solid road period over the opening twenty minutes of action, the Oilers started what seemed to be an endless parade to the sin bin in period two, taking three consecutive minor penalties and a ten minute unsportsmanlike conduct to Ryan Smyth.

Not surprisingly, the Wings would break the scoreless deadlock, as Pavel Datsyuk shoveled home his fourth of the season, with Detroit on a two man advantage.  Despite giving up the opener, Khabibulin was rock solid in his first appearance since March 30th, 2012. The forty year old guardian made as good a stop as you will see, stoning Damien Brunner with a brilliant pad stop late in the second, keeping it a one goal game and giving his team a chance to come back.

Edmonton would get their goaltender back on level terms, as Schultz whistled home his trademark wrist shot, up and over a helpless Jimmy Howard, whom has yet to see the rookie blueliner's shot on goal. Teemu Hartikainen did his best Tomas Holmstrom impersonation, eclipsing Howard with a perfect screen, helping Schultz pick up his fourth power play goal and sixth point on the man advantage this season.

The Oilers were handed a glorious opportunity to walk out of Joe Louis Arena with a victory in regulation time, as they were given four third period power plays (including an early two man advantage) but they hardly made Howard break a sweat. The Wings penalty killers swarmed Edmonton all afternoon and the visitors simply had no answers.

In what was nearly twelve full minutes of time on the man advantage, the Oilers could muster all of four shots on net, one of which being the Justin Schultz power play marker. The combination of their refusal to dump the puck in and go get and actually shoot the puck when the opportunity presented itself, were the two biggest reasons Edmonton now set with four regulation losses and an overall record of 4-4-3.

Give Detroit credit, as they were simply outstanding on the penalty kill, allowing former Oilers bench boss and current Red Wings associate coach Tom Renney, get the last laugh on the organization that gave him his walking papers after a disappointing showing during the 2011-2012 campaign.

Ralph Krueger's crew continued to get kicked around in face-off circle, losing thirty-three of fifty draws on the afternoon, as the Wings seemingly won every crucial face-off on the afternoon. With veteran centre Eric Belanger eligible to come off the IR list on Sunday afternoon, Krueger could not only be getting back his top face-off man (52.7%) but also one of his best penalty killers, in what is almost a must win situation on Sunday afternoon in Columbus.

While it still may be considered "early" in the minds of some, tomorrow afternoon's clash with the Blue Jackets will be Edmonton's twelfth game of the season. Meaning they will have reached the quarter pole of the National Hockey League's abbreviated forty-eight game schedule. They still may have thirty-six games to go, three-quarters of the year, but by no means is it still "early" in the 2013 NHL campaign.
Posted by Oil Drop at 5:37:00 pm