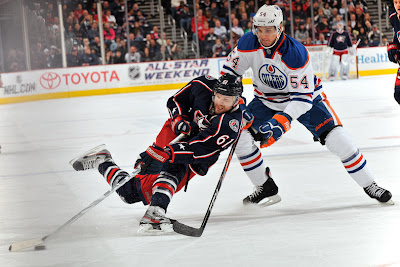 With Shawn Horcoff set to be out of the Edmonton Oilers lineup for the foreseeable future and Eric Belanger likely another seven to fourteen days from returning to action, all signs seemed to be pointing to the Oilers re-calling Chris VandeVelde or possibly veteran Josh Green from the Oklahoma City Barons to fill the void.

Instead the club decided to pull one out of their hat and called up centre Mark Arcobello, in what was a bit of a head scratcher of a move.

The Oilers have had their issues producing five-on-five but after being schooled in the face-off circle by the Vancouver Canucks on Monday night, it is clear this team needs some help in the dot...and in a hurry.

Making the move to bring up the diminutive centre even more curious.

While Arcobello has put together a very nice season for Todd Nelson's club down in OKC, earning a trip to the AHL All-Star Game, he does not necessarily fit the big club's current needs. Now if the plan is to have the 5'9" centre play in between Taylor Hall and Jordan Eberele, whom he collected nineteen of his thirty-nine points with... in all of twelve games, that angle could at least be argued.

However, if the plan is to use both Arcobello and Anton Lander in third/fourth line roles, this move makes little to no sense. At the best of times, this team is challenged by its lack of size but adding these two to the duo of Ryan Nugent-Hopkins and Sam Gagner, is a disaster waiting to happen.

While a guy like VandeVelde will never be anything more than a depth player, his size and ability to hold his own in the face-off circle would go a long way in helping the Oilers with their current shortcomings. During his five game audition last season, the former fourth round selection struggled in the dot against the Anaheim Ducks and Columbus Blue Jackets but was over 50% in his other three appearances against the Vancouver Canucks, Los Angeles Kings and those very same Ducks.

The other added bonus, is the twenty-five year old would help Edmonton's suddenly depleted penalty killing units. Heading into Wednesday night's game against the Dallas Stars, head coach Ralph Krueger is staring at the possibility of using Lander and Gagner as his two centres on the PK.

Not exactly a killer pair by any stretch of the imagination, though he also has the option of using Ryan Smyth and Lennart Petrell in one tandem and have Lander and Magnus Paajarvi on the second. Far from ideal but much better than the alternative. All of which could be avoided, had VandeVelde been re-called.

There is no question that Belanger will slide into Horcoff's third line role upon his return, leaving a fourth line centre spot open for the taking. This organization decided to waste half of Anton Lander's rookie season in that exact role during the 2011-2012 campaign and you would hope they would not go down that route again.

Bringing us back to the Arcobello vs VandeVelde comparison as a bottom six forward and frankly there isn't one. It should really be a no brainer for Krueger and his staff but for whatever reason, this organization seems to be trying to outsmart themselves.

At the moment, the Edmonton Oilers do not have a long term in house replacement for either one of Eric Belanger or Shawn Horcoff. That being said, they do have pieces necessary to cover them off in the short-term and yet they have decided to not use one of those parts. Curious indeed.
Posted by Oil Drop at 7:18:00 am