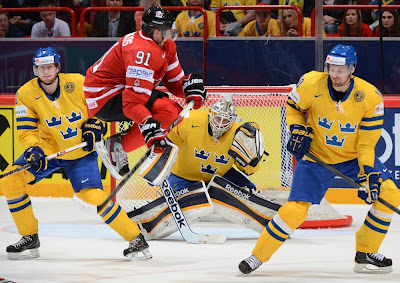 Netminder Mike Smith bounced back with a stellar performance, stopping all thirty-three shots he faced for the shutout, after falling to Switzerland in his his opening start if the tourney. The victory gives Canada ten points and sole possession of second place in Group S, just one point back of the surprising Swiss for top spot in the division.

Canada wasted little time in jumping out to an early lead, as Stamkos wired an absolute bullet past Jhonas Enroth at the 8:56 mark, with the Swedes down a man. The power play marker was only the third of the preliminary round for the Canadians but they are slowly rounding into to shape on the man advantage. A pair of quick passes from defencemen Brian Campbell and Edmonton Oilers youngster Justin Schultz, opened up a lane for the Lightning's triggerman to have a wide open look, leaving the Buffalo Sabres tender little chance on the play.

Enroth would get his revenge before the period was out, robbing Stamkos with a brilliant pad save in tight, keeping his team in it, despite being badly outplayed for much of the opening twenty minutes. However they would finally extend the lead early in the second, as Luke Schenn rifled home his first of the round robin, beating Enroth high to the glove side, inside the opening minute.

Canada kept coming, pushing their lead to three before the period was out. Jordan Staal made the most of a lovely feed from Colorado's Ryan O'Reilly on a two-on-one break, putting one just beyond the reach of a fully extended Enroth, to make it a three goal bulge. Staal had the good fortune of having just stepped out of the penalty box and finding himself in the midst of an odd man rush.

Through forty minutes of play, it was men against boys. Had it not been for the heroic effort of their diminutive netminder, Sweden could have found themselves down at least half a dozen, heading into the intermission. To their credit, they come out hard for the final twenty minutes, peppering Smith with seventeen shots but the Phoenix Coyotes number one man was up to the challenge.

It may not have been the finish head coach Lindy Ruff was hoping for, being badly out shot 17-5 in the third period, the Canadians had it in cruise control over the final twenty minutes of action. With their record now sitting it 3-0-1 for the championship, Canada will look to make it three wins in a row on Friday morning/evening, as they take on Belarus at 2:15 pm (EST) on TSN.

Look for Edmonton's Devan Dubnyk to get the call in between the pipes for third time in five games, as Ruff continues to employ a goalie rotation throughout the group stage of the competition. Canada will than have Saturday off before completing their preliminary round schedule with games against the Czech Republic on Sunday and Slovenia on Monday.
Posted by Oil Drop at 7:10:00 am